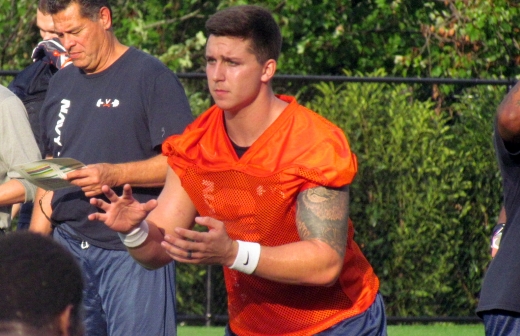 Quarterback Kurt Benkert hasn’t been at the University of Virginia for very long, enrolling on Grounds during summer sessions after graduating from East Carolina University this spring. In just a few months, though, he is connecting well with his new teammates.

“I’ve made up for a lot of lost time in a short time,” said Benkert. “It has been fun to be around the guys and figure out who they are.”

Cavalier offensive coordinator Robert Anae’s offense is familiar to Benkert, who, despite missing spring practice, is confident as he competes with seniors Matt Johns and Connor Brewer to be Virginia’s starting quarterback.

“Really, I feel like I’m ahead,” Benkert said. The offense, he adds, “is pretty much the same” as the offense he ran at ECU.

“There is a few wrinkles, but every different place you go to has something different. I’d say 75-percent of it is the same. Some of it is different terminology, but pretty much the same thing I’ve been running,” Benkert said.

Initial impressions of the Florida native are favorable. A strong and solid 6’3”, 225 pounds, Benkert has great zip on his passes and has connected on several deep throws through the first two days of camp. He has shown the ability to escape from pressure and make plays with his legs, even though he admittedly is not completely 100-percent back to form following a knee injury that sidelined him for all of last season with the Pirates.

“Close to it, I’d say. As close as I’ll be right now,” Benkert answered when asked if he was 100-percent. He had been named ECU’s starting quarterback prior to the knee injury.

“I’m getting there,” he said. “I’m ready to play ball. It’s not really stopping me from playing football at a high level.”

Levrone Emerging As A Leader, Seeks To Be a Consistent Contributor

“Meet them in the end zone,” Andre Levrone said enthusiastically, leading the charge in congratulating the final group to successfully complete the Will Development drill at the conclusion of the first day of camp.

At the beginning of Day 2, there was Levrone, going full speed in the lead group of pre-practice warmup drills run by strength and conditioning coach Frank Wintrich. After missing the final 11 games of 2015 with an injury, the 6’3”, 215-pound wide receiver is healthy, confident, and comfortable heading into 2016.

“[Bronco Mendenhall’s] system is run a lot like a military system. If you do something wrong, there will be a consequence. If you do it right you will be rewarded. That resonates with me and takes me back to my roots, so I feel like it’s something I can flourish in,” said Levrone, whose family has an extensive military background.

When healthy, Levrone, who has been plagued by injuries in high school and college, has shown flashes of his athletic and playmaking ability. Those flashes, he hopes, will become consistent production.

“I just want to come out here, be energetic, make plays consistently from day one through the end of camp, so when we get on the field September 3 everybody knows that they can count on me,” Levrone said.

– The second day of UVA camp was supposed to be shorter, but because of “lack of execution and concentration” according to Bronco Mendenhall, the team “earned more work.”

“Lot of repeats today,” UVA’s first year head coach said on Saturday. “But we still eventually got the work in.”

– Dynamic wide receiver Olamide Zaccheaus suffered an apparent hamstring injury on Friday. He was at Saturday’s camp but did not practice. The good news is that Zaccheaus seemed to be walking fine and, toward the end of practice, was spotted doing some light jogging. The speedy sophomore, an impact player as a true freshman in 2015, eyes a big role in Virginia’s offense this season.

– Red-shirt junior defensive back Kirk Garner has only seven tackles in two seasons at Virginia, but he may have finally found his niche. A highly regarded recruit out of Good Counsel (Olney, MD), Garner has received first-team reps at safety in each of the first two days of camp. He played well on Saturday, showing closing speed and good range. The former cornerback seems confident and comfortable in his new role.

– Junior wideout Doni Dowling impresses as a leader. In one instance Saturday, he took aside true freshman receiver Cole Blackman for instruction and encouragement. Dowling and the aforementioned Levrone are embracing leadership roles on the Virginia offense.

Overall, the wide receiver group has looked pretty good in the first two days. Dowling certainly has high expectations for the group.

“I just want to be able to catch the ball and for our young guys to catch up with us. We are going to be a top receiving group in the ACC and top group in the nation. I have that expectation of my group by the end of the year, but coming in we just got to take the steps needed to win first and the rest will fall in line,” Dowling said.

– Taquan Mizzell, David Eldridge, and Joseph Reed took turns on punt return. All three performed well. Mizzell looks like a natural fit there, but Eldridge looks very comfortable, too, and could be one to watch in the role. He returned four punts for touchdowns and had three kickoff returns for scores in an outstanding career at Kettle Run (Nokesville, VA).

– Sophomore outside linebacker Cory Jones really looks the part. At 6’5”, 215 pounds, he is very fluid and fast, flashing the ability to get after the passer but also to cover in space. If the light comes on, he could be an answer for the Hoos at outside linebacker.