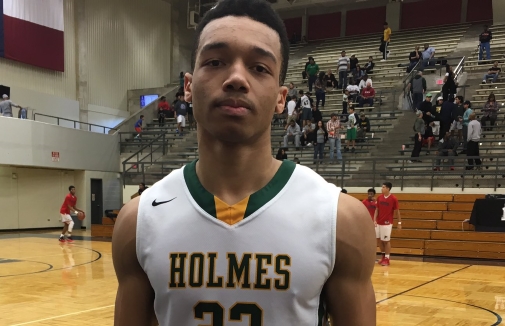 The first and only time Marco Anthony has been on UVA’s Grounds before was in June of 2015 for a Scouts Focus basketball camp. Anthony, now a Cavalier commitment, will return to Charlottesville this weekend for an official visit.

“I was really impressed with how beautiful everything was,” Anthony said of UVA in an earlier interview with TheSabre.com.

Anthony announced his commitment to the Cavaliers earlier this year on July 19, one day after being offered a scholarship by head coach Tony Bennett. He averaged 20.3 points per game his junior season as Holmes’ starting point guard, and he followed that up with a good performance for Pro Skills on the Nike EYBL circuit.

Quickley, a 6’4”, 185-pound junior, hails from John Carroll in Bel Air, Maryland. Virginia, Connecticut, Kentucky, Louisville, Maryland, Providence, and Wake Forest are among the scholarship offers he is considering.

Coach Bennett hosted Wesleyan Christian (High Point, N.C.) wing Aaron Wiggins on Grounds last weekend. Now you can count Virginia as one of the scholarship offers the 6’6” junior has received along with Arizona, California, and Maryland.

Aaron wiggins was on a unofficial visit this past week to UVA and had a great time. @NCPreps @Aaron_Wiggins_ @Team_CLT

Wiggins attended Grimsley High School (Greensboro, N.C.) his sophomore year, averaging 15 points per game during the season. USA Today’s Jason Jordan has a nice write-up on the rising prospect (click here to read it), and you can also check out highlights below.