Head coach Bronco Mendenhall and his staff hosted established targets and extended some new scholarship offers on Saturday, March 4, during the latest of Virginia football’s Junior Day recruiting events. First, here is a rundown of the latest prospects to receive offers from the Cavaliers.

Honored to say I have received an offer from THE University of Virginia #HoosRising pic.twitter.com/dUF6UF5YIv

This is the first offer for the 6’4”, 205-pound junior, who played for Champion High School in Boerne, Texas, last fall.

– Junior Mike Barrett revealed on Saturday that he now has an offer from the Wahoos. Barrett is a 6’0”, 210-pound quarterback/athlete prospect out of Lowndes High School in Georgia. Check out his junior season highlights below …

– St. Augustine Prep (N.J.) sophomore lineman Christopher Mayo also secured an offer from the Cavaliers. UVA is the first to offer this 6’4”, 290-pound prospect, who may be headed to The Peddie School along with the aforementioned Dawkins and Garrett if the below picture is any indication. 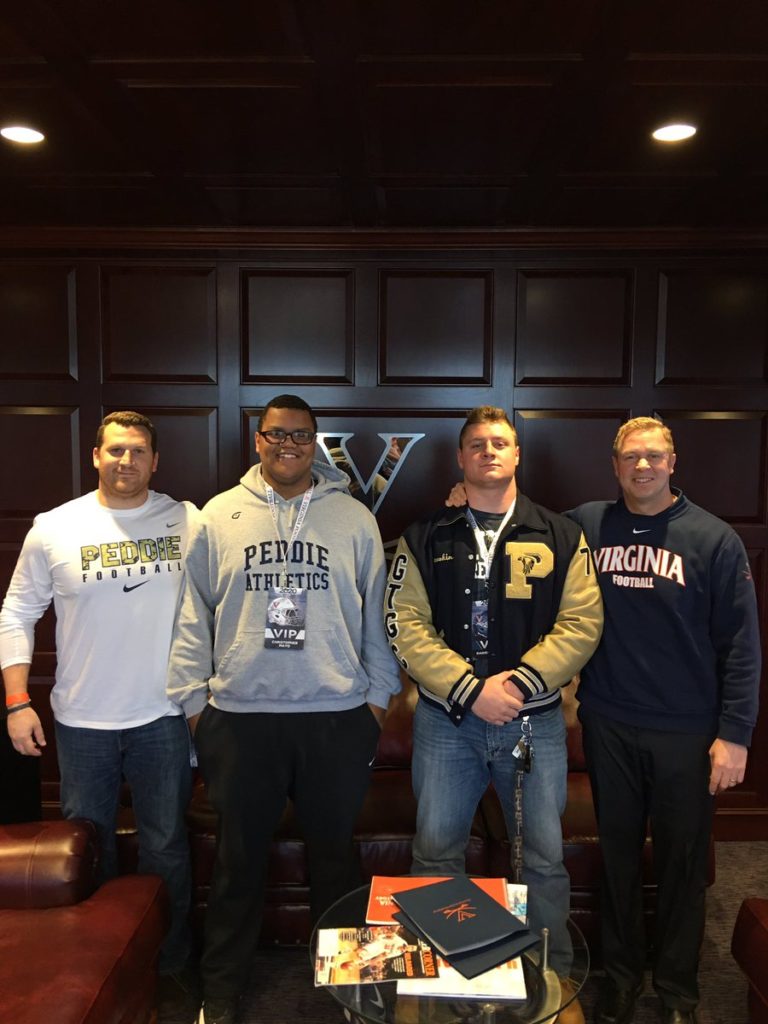 – Avalon School (Gaithersburg, MD) outside linebacker Noah Taylor, currently Virginia’s lone commitment in the class of 2018, was back in Charlottesville for the Junior Day event. Taylor attended the previous Junior Day as well and appears very firm in his commitment to the Cavaliers.

Pittsburgh may be the team to beat for Danielson, who holds offers from the Panthers and Louisville, Rutgers, Syracuse, Virginia, Virginia Tech and West Virginia.

– UVA is currently the only scholarship offer for Oscar Smith (Chesapeake, VA) offensive lineman James Collins. It was the first BCS program to offer Hayfield (VA) athlete Brian Cobbs, who has since added scholarships from NC State, ODU, Temple, Wake Forest and Yale. Coach Mendenhall got in early with these two in-state talents, who checked out what Virginia has to offer last weekend.

– Oxon Hill (MD) defensive lineman Noah Hayes and Detroit (MI) Catholic Central offensive lineman Nick Carey have not been offered by the Cavaliers but did attend the Junior Day. Could be a few names to keep in mind down the road.

– Class of 2017 placekicker/punter Chase McGrath visited Virginia over the weekend. He is also considering Army, South Carolina and Texas Tech. The Cavaliers are looking to add another kicker to go along with Westfield (Chantilly, VA) star Brian Delaney, who signed with UVA last month.

It certainly never hurts for a program to be able to show off its NFL players. Two NFL Hoos were in John Paul Jones Arena for Virginia’s win over Pittsburgh.