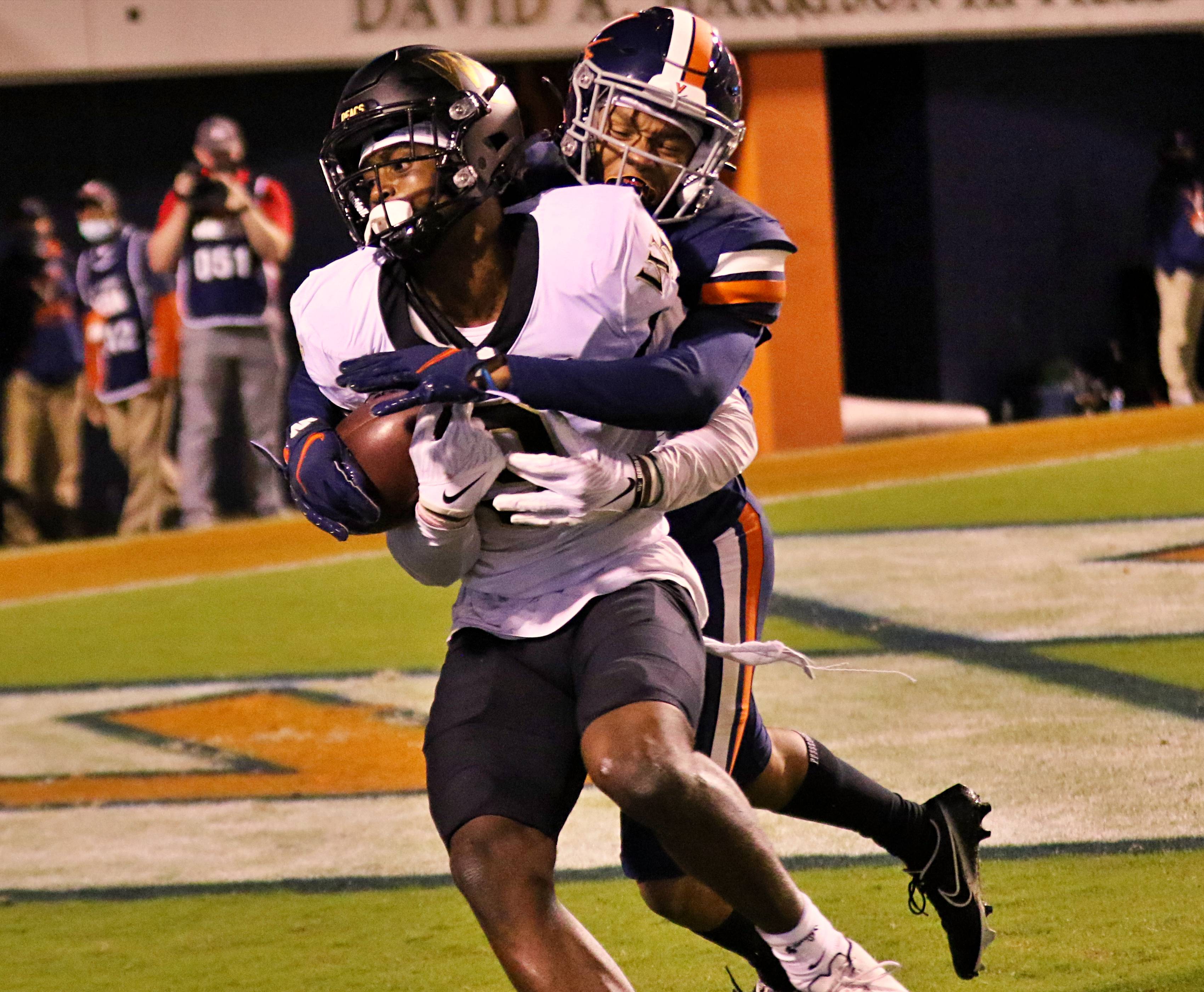 The defensive woes the University of Virginia football program experienced on the road last weekend at North Carolina carried over to Scott Stadium on Friday night as Wake Forest thumped the homestanding Hoos, 37-17.

The loss drops UVA to 2-2 overall and 0-2 in Atlantic Coast Conference play. Though it is only September, thoughts of repeating as Coastal Division champions seem far-fetched following consecutive dismal defensive performances.

“We weren’t able to play cleanly, and that’s a direct reflection on me as the head coach, which then my job is to pass that on to my assistant coaches and their job then is to pass that on to the players,” UVA coach Bronco Mendenhall said. “Man, not making enough plays in the right moments to take over the game – especially at home. I was so thankful for the crowd and the energy. They had every chance and we were trying to give them every chance to stay with us and into the game. But the reality is I didn’t have our team executing well enough to maintain the home field advantage. That’s just something we’ve taken such great pride in and made so much progress that it probably hurts, maybe more than anything. We have lots and lots of work to do in terms of execution, in terms of discipline, in terms of making the right plays at the right times and having that sustained consistently from beginning to end. Again, that’s a direct reflection of my leadership, and the coaches are now an extension of that, and how the players play reflects preparation. I’ve always believed teams play as they’re prepared. I’m not happy with the result.”

Wake Forest, which improves to 4-0 overall (2-0 in the ACC) and becomes just the third team to defeat Virginia in Scott Stadium since 2018, imposed its will from the start. The Demon Deacons took the game’s opening drive 75 yards for a touchdown, scoring on a 39-yard touchdown pass from quarterback Sam Hartman to wide receiver Taylor Morin, who was wide open courtesy of a blown pass coverage. The Demon Deacons converted two third downs prior to the big play, and the inability of the Virginia defense to make plays when it mattered most proved to be a consistent theme.

Wake Forest scored points on its first seven drives, posting 37 points in the process. Dating back to the second half of the North Carolina game, that’s 11 straight possessions in which UVA surrendered points to the opposition. Virginia finally forced a punt on the visitors’ eighth drive of the game, but at that point the game was effectively over, with the Hoos trailing 37-17 with 8:25 left in the fourth.

“I actually thought we played better defense than we did last week. I thought we were more consistent, and I thought we were more executionally sound,” Mendenhall said. “I thought we had more positive plays when I was looking out there, from beginning to end. But still, mistakes at critical times. We gave up the long pass early, the deep crosser, and we got to run as well early on where we misfit that run. But then there’s key third downs, key fourth downs, things like that where you have to make those plays to get enough opportunities for your offense to score. We had chances all the way through middle and third quarter, where I still felt we had a great chance to possibly regain momentum and execute our way in, but we didn’t through inconsistencies.”

“I don’t think effort is the problem, I just think guys need to lock in on their assignments more and that’s the good thing about it is that we got a lot of time to practice and a lot of time to watch film and get better from it,” Cavalier linebacker Noah Taylor said.

The defense’s struggles cost the Hoos the game, but the Virginia offense failed to find the rhythm it had for most of the previous three games. Cornerback Caelen Carson broke up Brennan Armstrong’s end zone pass attempt to Dontayvion Wicks on 4th and goal from the 5, ending UVA’s opening drive. Armstrong and company reached the Wake Forest 4 on their second drive of the game, but once again failed to score a touchdown. Justin Duenkel’s 21-yard field goal cut the Demon Deacon lead to 10-3.

Wake responded to the field goal with another touchdown, a 1-yard touchdown run by Justice Ellison, who raced 63 yards on a run earlier in the drive to help set up the score. The visitors would extend their lead to 20-3 at halftime.

Virginia’s offense came alive in the third quarter, beginning with a touchdown drive to open the half. Dynamic tight end Jelani Woods’ 17-yard touchdown catch – a special play in which he caught the ball over the middle of the field before running over a safety and into the end zone – got the Hoos within two scores at 20-10.

UVA scored touchdowns on its first two possessions of the third quarter. Each time, Wake Forest answered with a touchdown of its own. The home team never responded once down 34-17, going scoreless on its final five drives, which included a punt, a turnover on downs, a fumble, an interception. Armstrong fell to the ground on a scramble play to end the game. 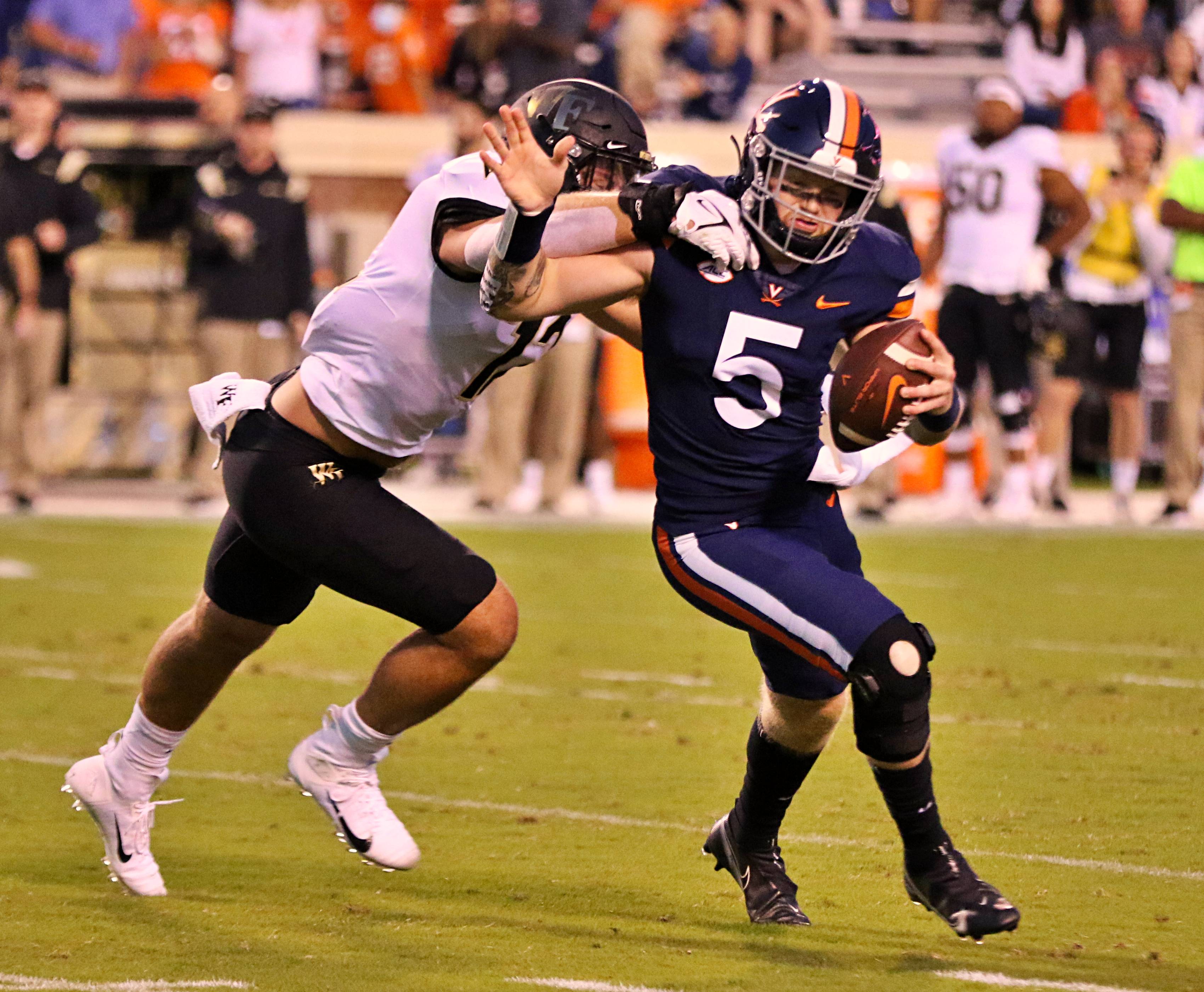 Virginia finished with 506 yards of total offense and a 407-yard passing performance from Armstrong. UVA’s redshirt junior signal caller was not as sharp as previous weeks and was pressured consistently from start to finish. Armstrong was sacked six times by the Demon Deacon defense, which amassed nine tackles for loss and four pass breakups as well. He completed 55.9% of his 59 passes, the first time his completion was below 67% this season. Wicks was his top target on the night, finishing with eight receptions for 114 yards and a touchdown. Woods added four catches for 73 yards and a score, and receiver Billy Kemp IV finished with seven receptions for 65 yards.

“I thought we executed really well in the second half. They came back and scored and had a chance to get back into it and we responded,” Wake coach Dave Clawson said. “I thought we got good pressure on the quarterback when we needed it. We were a little bit bend but don’t break. We gave up some plays and some yards but for the most part we kept them out of the end zone and our offense was incredibly efficient.”

Wake Forest totaled 473 yards of offense, including 270 through the air and 203 on the ground. Virginia surrendered six big plays (15+ yards) in the passing game and three big plays (10+) in the rushing game. Third downs hurt the Cavaliers, who allowed Wake to convert 7-of-12 in the first three quarters. Hartman’s 12-yard touchdown pass to A.T. Perry, the likely backbreaker of the game, came on 3rd-and-goal from the 12 and put the Demon Deacons ahead 34-17.

There is no rest for the weary. Literally. A second consecutive short week of preparation awaits Virginia, which heads to Miami next Thursday night (September 30) still in search of its first ACC win.

“It’s definitely frustrating, but, you know, you just got to put it behind you,” Taylor said. “We got a great opportunity, we have only lost two games, we have a big season ahead of us. We got to get up on Miami this week so the best thing we could do is just put that behind us and just focus on this Thursday night game we got coming up.”

– Running back Wayne Taulapapa did not play (concussion). Defensive lineman Adeeb Atariwa returned to the field for the first time since William & Mary but played very few snaps.

– Starting left guard struggled significantly in the first half. In the second half, UVA shuffled up its offensive line a bit, moving starting left tackle Ryan Nelson inside to left guard, where he has played before. Sophomore Jonathan Leech saw his first signficiant stretch of playing time, replacing Nelson at left tackle. Olu Oluwatimi (center), Chris Glaser (right guard), and Ryan Swoboda (right tackle) remained in their usual spots.

Armstrong was the only other UVA rusher, finishing with 17 carries for 33 yards. Keytaon Thompson did not have a rush in today’s game.