Ding dong, the streak is dead! Yes, let the joyous news be spread, the wicked old streak at last is dead!

After 15 long merciless, unforgiving, crushing, annoying years, the streak is no more. The Virginia football team’s losing streak to rival Virginia Tech is over. Done. Buried. The 2019 Cavaliers came through Friday with the streak-busting victory in a thrilling 39-30 win that set off a celebration for the ages at Scott Stadium.

Fans waited with jubilation perched on the walls of brick. Fans ran. They rushed. They wandered. They danced some more.

No, it was no ordinary rivalry win this time around. Cathartic may not be a strong enough word.
“I know four years feels like a long time to me. For those that have had it be 15, it’s hard to imagine,” Virginia coach Bronco Mendenhall said. ”… the magnitude, I don’t think I can grasp right now for those fans and for the UVA faithful that have been through the rest.”

Year after year. Game after game. Hope after hope. Never light at the end of the tunnel. In the middle of those years, it usually meant an extended winter as the loss ended the season with no bowl games to attempt to cleanse the palate. Nine long offseason months to sit on that same loss. Time after time. Again and again. With crowing in the distance.

To be sure, there were other things to bring joy to Hooville. Consider all that happened in the 15 years. Virginia won 14 National Championships. Men’s lacrosse won three. Men’s soccer and women’s rowing won two each. Men’s tennis built a dynasty with four titles in five years. Women’s lacrosse won one.

UVA baseball wrote the first redemption story in 2015 after losing in the final game of 2014 on a late-inning home run. Then the Virginia men’s basketball team created a sports story for the ages with its own redemption run in 2019.

Plus, of course, there have been a steady stream of ACC Championships flowing to Charlottesville. From the time the conference expanded in 2004 through Friday’s game, the Hoos brought home 68 conference titles. The most recent came from the men’s soccer team just a couple of weeks ago.

But football? Never football. At least not in the game that mattered so much to so many and not with a championship of any kind.

That frustration all melted away in the chill of November.

To make it even sweeter, to end the streak and claim the Commonwealth Cup, the Cavaliers had to take it away in a game to decide the ACC Coastal Division race. The Hokies entered the contest at 8-3 too and this was a winner-take-all showdown. High stakes. High drama.

Then for added measure, the Hoos had to come from behind. Thrice. After holding the lead for the entire first half, UVA saw its small lead evaporate on the first drive of the second half as Tech tied it at 13-13. By the time the third quarter crawled below five minutes, the Hokies had the lead at 20-13 and obviously brewing confidence. Someone on the visiting sideline shouted that the Cavaliers could feel the momentum drifting away.

Maybe. But the Wahoos’ fighting spirit wasn’t going anywhere. In fact, the will to respond that has existed all season long rose again. Bryce Perkins connected with Joe Reed, Billy Kemp, Terrell Jana, and Hasise Dubois at different times with huge gainers. Even when the Hokies threw a haymaker in the form of a 61-yard touchdown pass, the Cavaliers answered. Then the defense took its turn to deliver. Noah Taylor baited a pass behind him and then quickly dropped into the hole to make the interception with less than five minutes to go.

Moments later, Brian Delaney lined up for a 48-yard field goal that split the uprights and put to rest all those special teams ghosts of years gone by in this rivalry. Then the Virginia defense voraciously slammed the door with a sack party and Eli Hanback touchdown that also resembled some of the plays that went the other way for so long.

So, yes, the players ran with exuberance around the field. So, yes, Bronco Mendenhall jogged up the sidelines and was grabbed in a neck hug by Marques Hagans, who lived the Tech turmoil from inside the program for so many years. So, yes, Mendenhall teared up a bit when the players tasked him with breaking the rock symbolic of a victory.

So, yes, fans rushed the field. So, yes, they took selfies and posed for pictures with players. So, yes, some fans wept. So, yes, they shared the break-through with their kids who had never seen this win before. So, yes, they danced and twirled, screamed and beamed.

So, yes, let the joyous news be spread, the wicked old streak at last is dead!

“Like I told a lot of people before, this means the world to me,” said Hanback, who grew up as a UVA fan. “Last time we beat Virginia Tech I was seven years old and I’m twenty-three now. So, to be on the team who beat the streak is the best feeling in the world.” 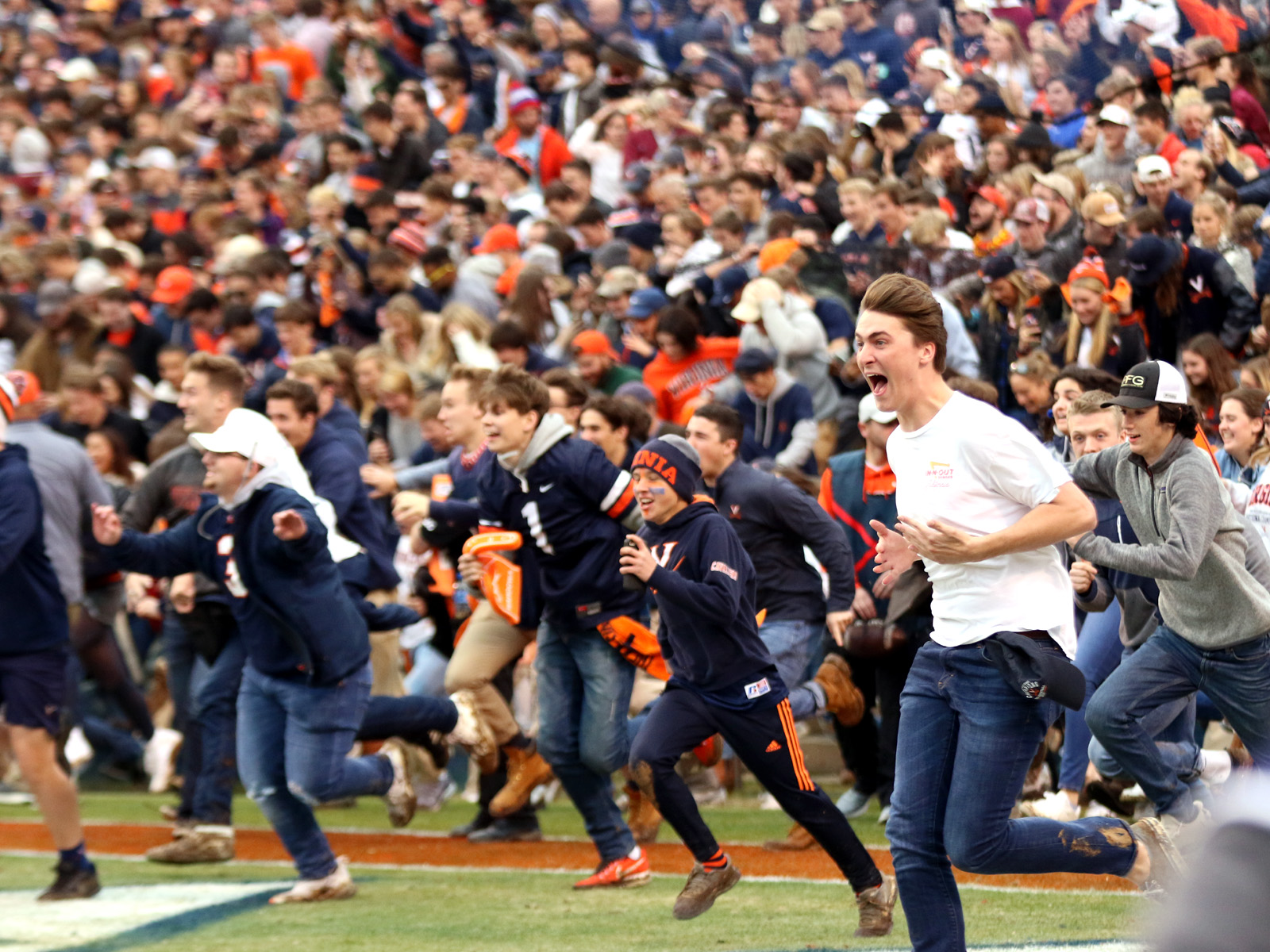 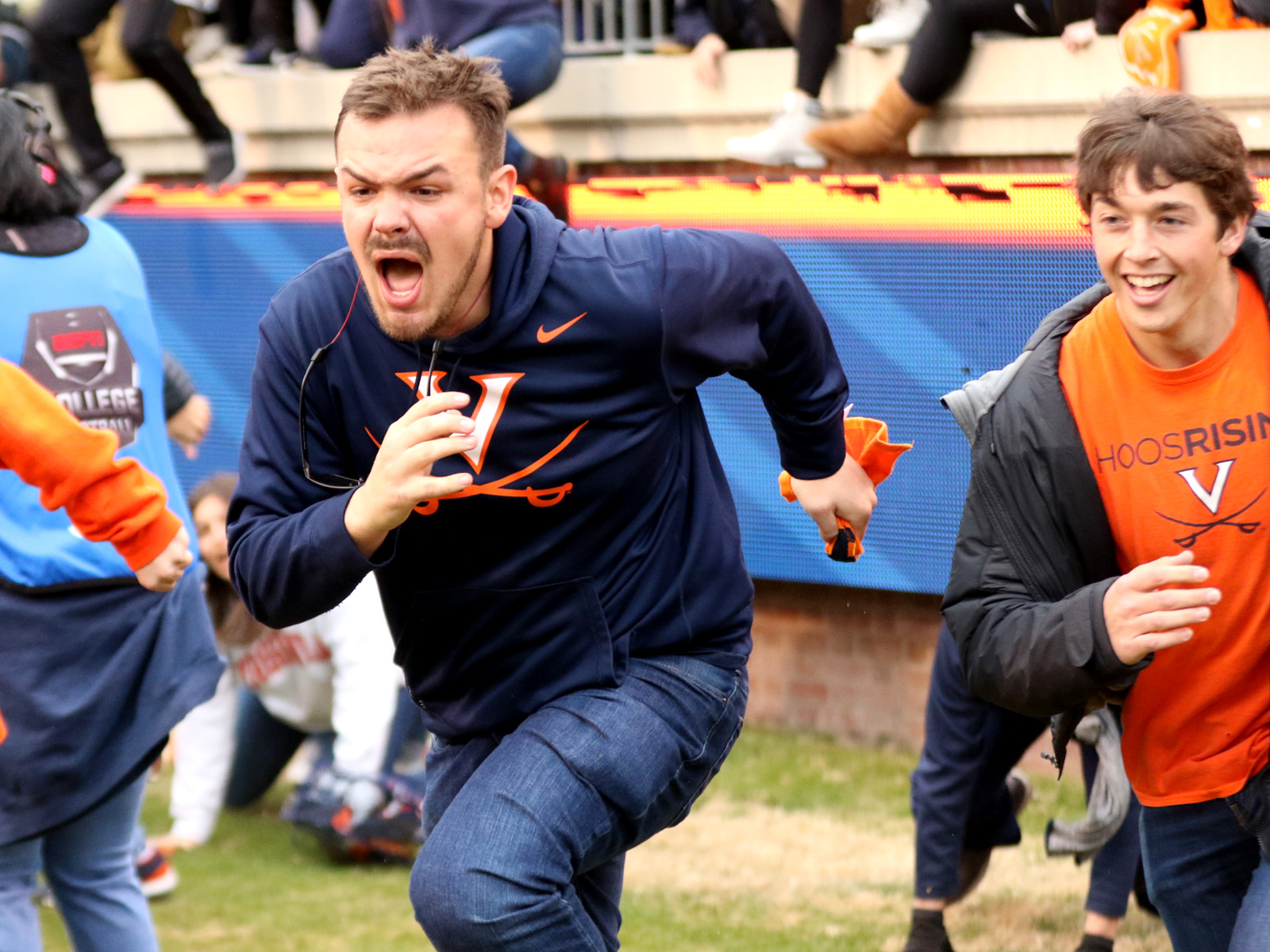 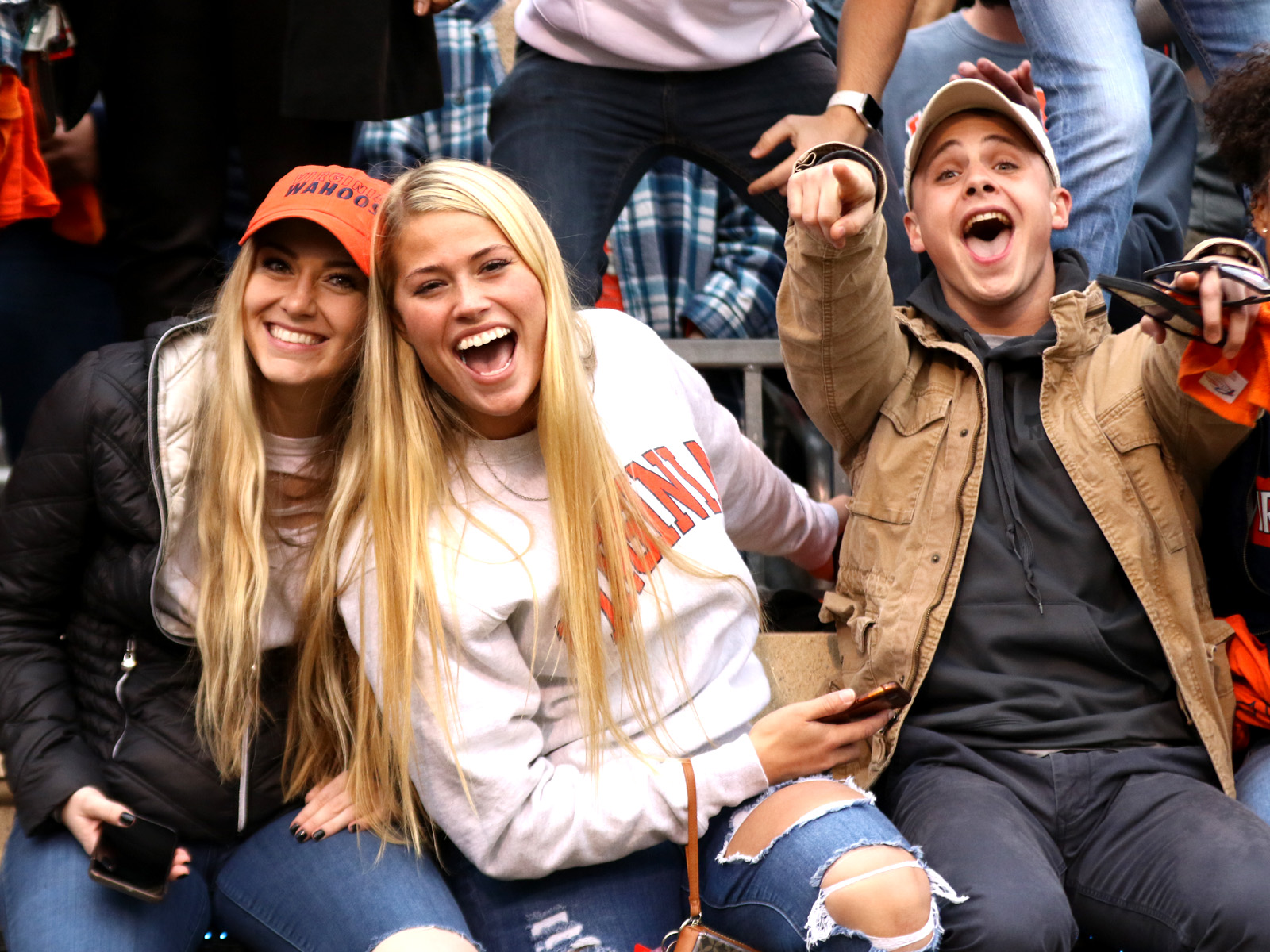 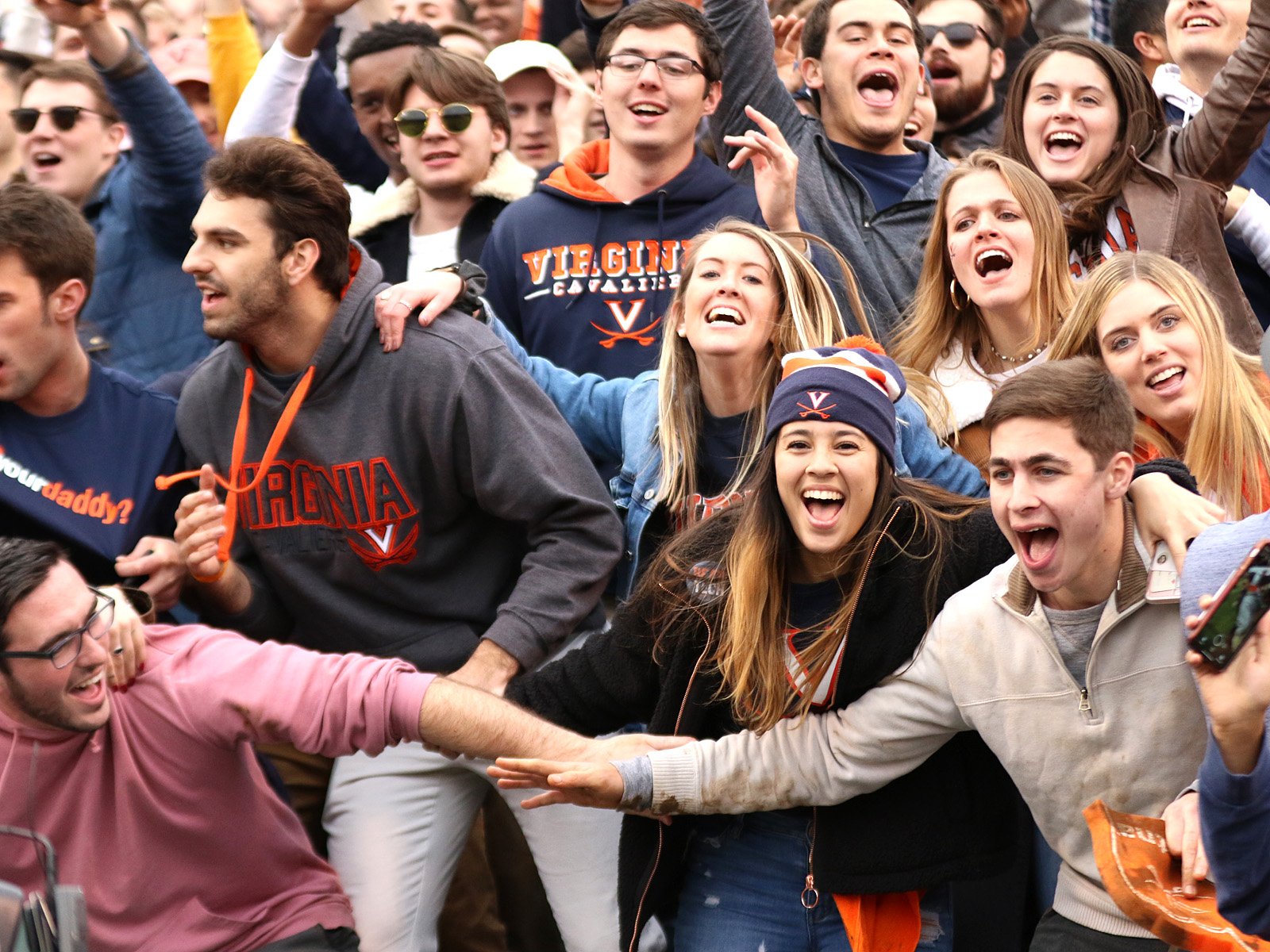 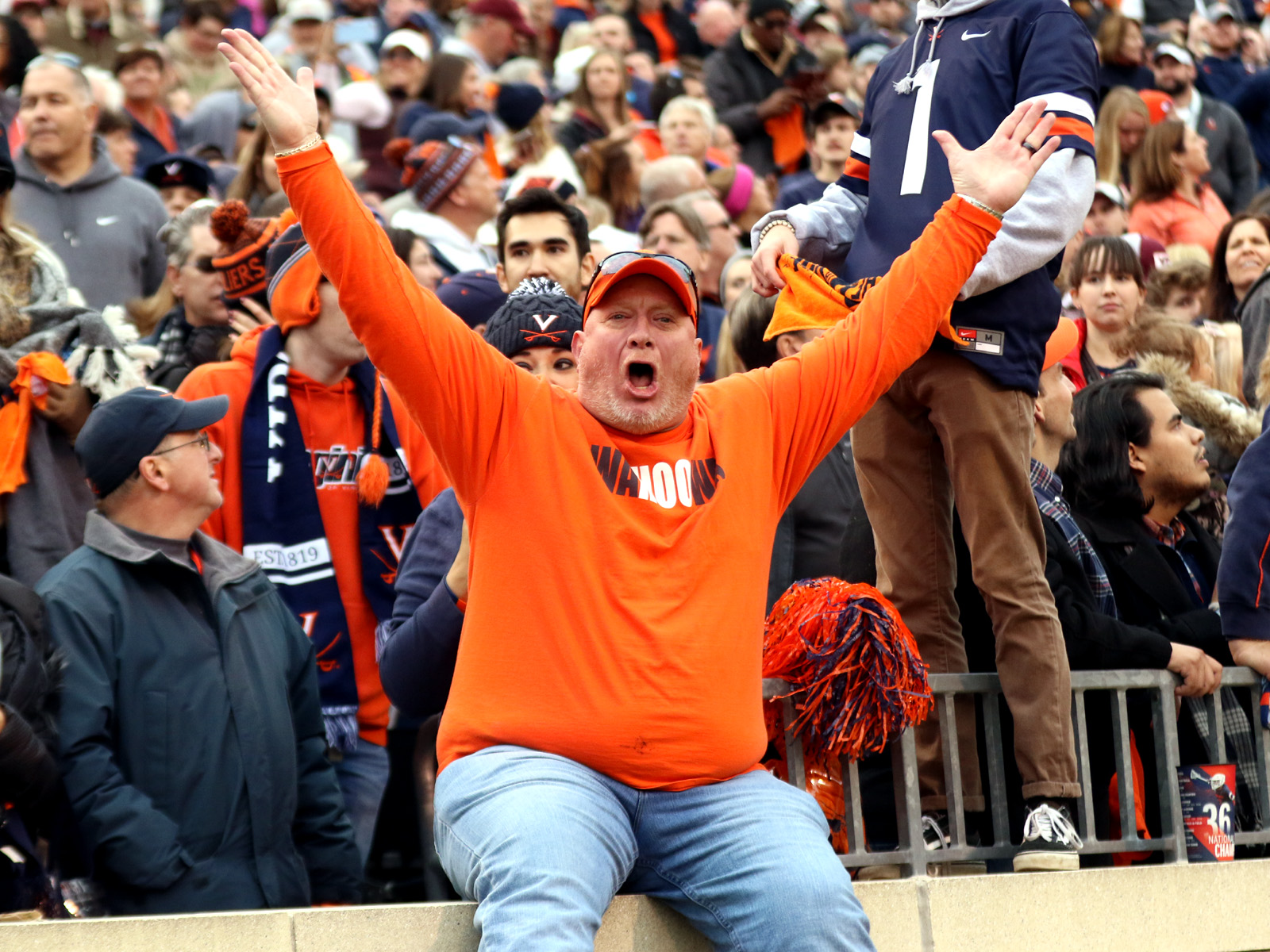 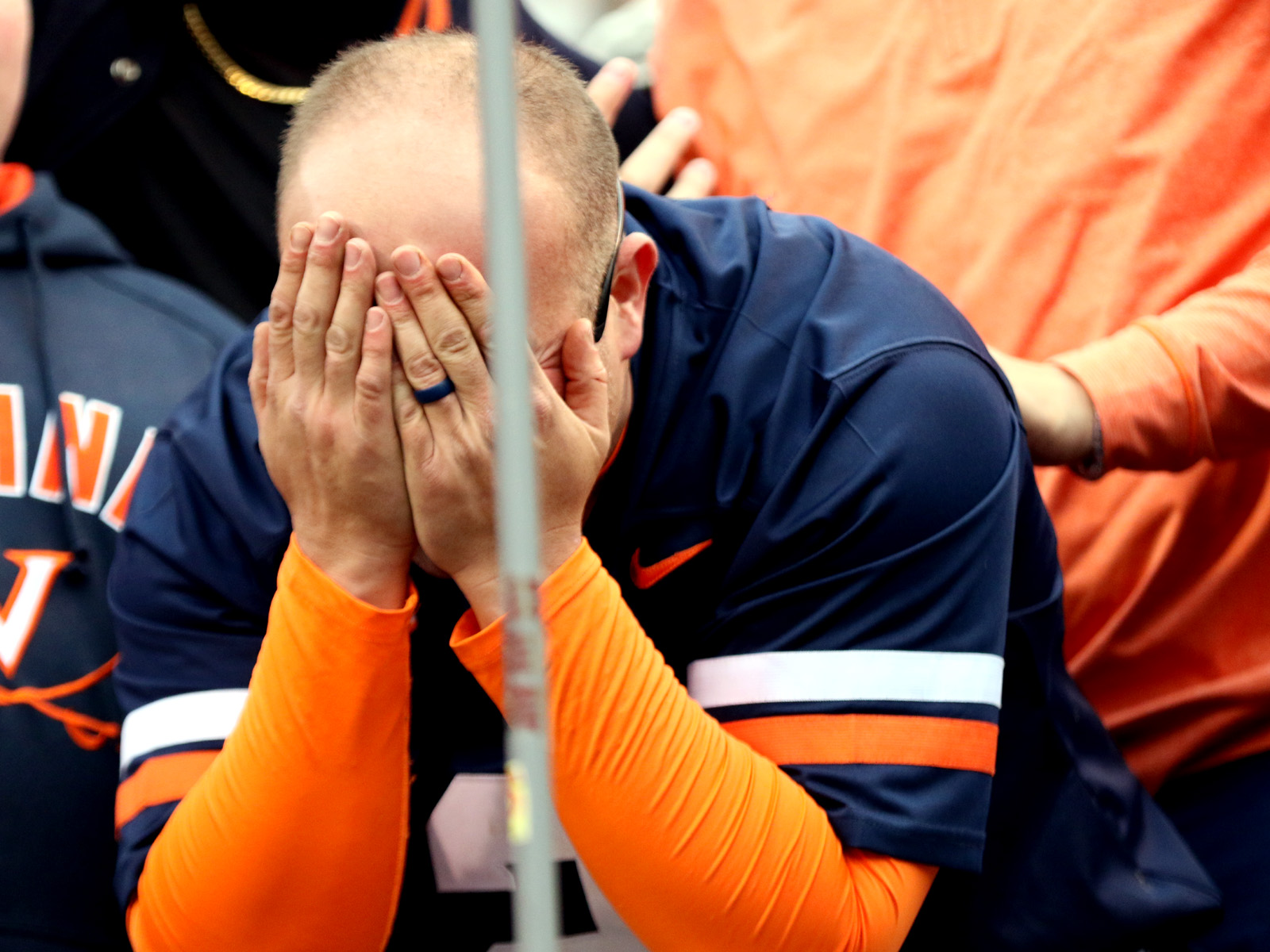