Concerns with the COVID-19 coronavirus pandemic halted the sports world in March, which included the cancellation of the NCAA Championships, spring seasons, and spring football practice for many college teams including Virginia. College conferences around the country have started to release information on fall seasons in recent weeks and the ACC announced its plans Wednesday afternoon.

The ACC Board of Directors announced that if public health guidance allows, all seven ACC sponsored fall sports will begin competition during the week of Sept. 7-12.

The ACC’s Medical Advisory Group recommended minimum standards for each campus to follow as fall sports return. The recommendations include weekly testing for close contact sports, standards for reporting positive test results, and cleaning and sanitizing protocols. Click here to read the full report. The advisory group includes Dr. John MacKnight, Medical Director for Sports Medicine at the University of Virginia. Any non-conference opponents would be required to meet the standards for the two weeks prior to competition against ACC teams, per the report.

“Today’s decision was made after months of thoughtful planning by numerous individuals throughout the conference,” said ACC Commissioner John Swofford in the news release. “The Board’s decision presents a path, if public health guidance allows, to move forward with competition. Our institutions are committed to taking the necessary measures to facilitate the return in a safe and responsible manner. We recognize that we may need to be nimble and make adjustments in the future. We will be as prepared as possible should that need arise.”

The ACC’s announcement on fall plans Wednesday provided some clarity to the fall sports teams and their preparations.

For football, the ACC adopted a schedule of 11 games with 10 ACC opponents and one non-conference opponent. The Big Ten and PAC-12 Conferences had announced earlier that they would only play games within their league. The non-conference opponents will be selected by the respective schools and must be played in the home state of the ACC institution. That means the season opener for Virginia has changed. UVA had been scheduled to open the season on Monday, Sept. 7 against Georgia in Atlanta.

“We certainly understand the ACC is doing what they feel is in the best interest of the conference and the health of their teams, staff and student athletes, and as our partners, we support them in that decision,” Gary Stokan, CEO & President, Peach Bowl, Inc. said in a statement. “However, we are disappointed we will lose the opportunity to host Florida State, Virginia and North Carolina and their fans in our scheduled Chick-fil-A Kickoff Games this season. We still look forward to hosting two top 10 teams in our Chick-fil-A Peach Bowl on January 1 in Mercedes-Benz Stadium.”

The week by week schedules and TV assignments will be made at a later date so now the Hoos’ season-opening opponent is unknown. The ACC’s first games will take place the week of Sept. 7-12. The 11 games will be played over at least 13 weeks with each team having two open dates.

The conference also announced that it had eliminated divisional play for this season so there is no Coastal Division nor Atlantic Division nor permanent and rotating partners this season. Instead, each team will play five home games and five road games within the league. Per David Teel of the Richmond Times-Dispatch, teams within 250 miles of one another will play each other and then other opponents were assigned.

Notre Dame, an independent for football, will also play a 10-game ACC schedule this season and thus be eligible to compete in the ACC Championship Game, which will be held in Charlotte on either Dec. 12 or Dec. 19 and will feature the top two teams based upon highest conference-game winning percentage. All television revenue for the 2020 season, including Notre Dame’s home games broadcast by NBC, will be shared equally among all 15 institutions. That football deal was reported to be worth $15 million annually when it was extended in 2013.

For Virginia, the assigned schedule breaks down with home games against Boston College, Duke, Louisville, North Carolina, and NC State plus road games against Clemson, Florida State, Miami, Virginia Tech, and Wake Forest. The four Carolina schools and VT are obviously within 250 miles of Charlottesville. Here is a grid of all the ACC assignments. 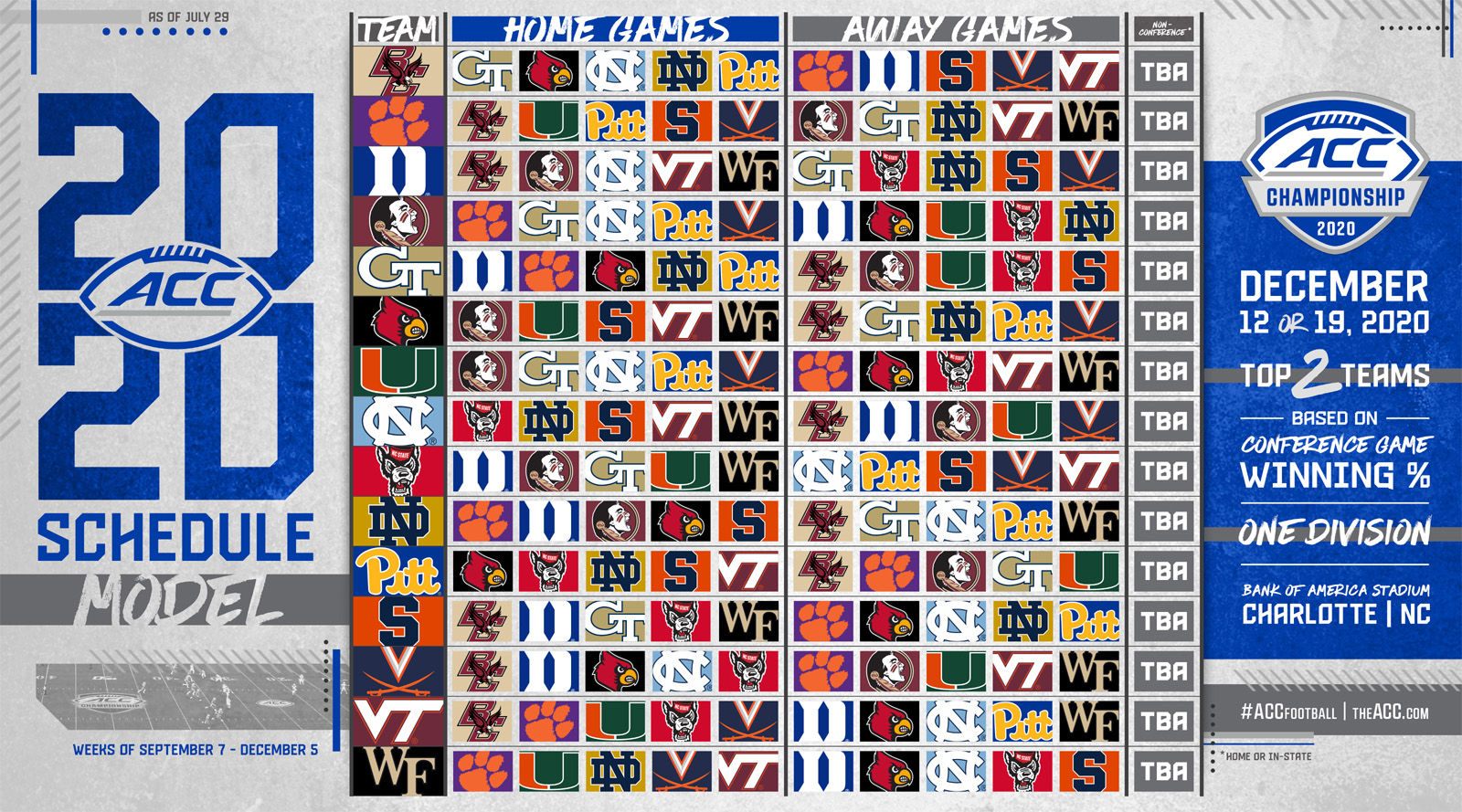 For other fall sports teams, competition may begin on Thursday, Sept. 10. The team sports will play a conference schedule that meets the NCAA minimum amount of games. That breaks down to six games for field hockey and both soccer teams and 10 games for volleyball. Any additional games against conference opponents or non-conference opponents will be made at the respective school’s discretion, but all opponents must meet the ACC’s medical standards. If league schools choose to play one another beyond the mandated schedule, it would not count in the ACC standings. The schools will be able to schedule regular season cross country competitions at their discretion. TV selections will be made at a later date.

Teams in all sports may continue to practice at their institution’s discretion.