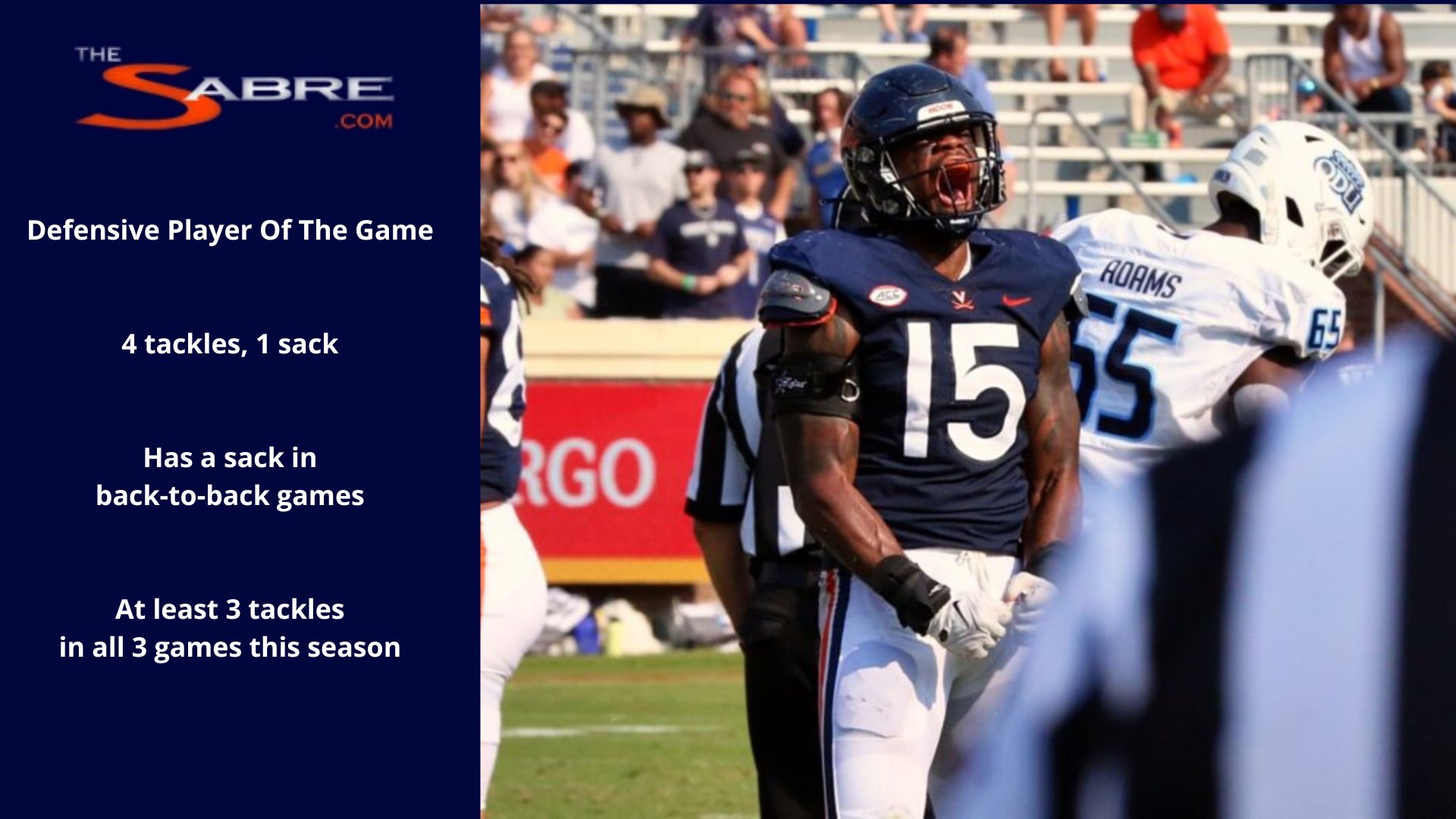 The Virginia defense gave up a late scoring drive that gave Old Dominion the lead, but it more than held its own the rest of the day thanks to Chico Bennett Jr., Jonas Sanker, Langston Long, and more. Fortunately, the offense drove for the game-winning field goal in a 16-14 victory and allowed the defense to enjoy what had been a mostly productive day.

“Definitely a sigh of relief,” Sanker said. “Definitely still stuck with us, giving up that last touchdown. You don’t want to give up any points. But at the end of the day, a win is a win. We’re going to use this week to get better, to make sure we never put them in that situation again.”

As noted above, several players had good days statistically. Long led the team in tackles for the second straight week, finishing with 9. Nick Jackson and Anthony Johnson added 8 stops, while Sanker and Josh Ahern contributed 7 each.

One player that had a few less tackles, however, but made a big impact was Bennett. The senior EDGE player was credited with 4 tackles (3 solo) and a sack. That’s the second straight game with the latter for Bennett. Against ODU, his sack forced a three-and-out with 7:25 remaining in the fourth quarter. That set up what could have been the game-sealing drive, but the offense stalled and Brendan Farrell missed a 36-yard kick.

Regardless, the sack from Bennett came at a critical time and that seemed to be a theme for him throughout the game. He teamed up on a third down tackle on the first drive of the third quarter that forced a punt. He made the sack in the fourth quarter. He consistently got pressure in the backfield as well.

It’s part of a solid start for him this season after missing last year to rehab a torn ACL. Bennett has 13 tackles with 2 sacks on the year. VirginiaSports.com’s Jeff White spotlighted Bennett this week and he continues to progress.

“He’s getting better,” said UVA assistant coach Chris Slade in that article. “He’s a great kid. He has a good heart. He wants to do well. He’s just got some bad habits that we’re trying to get him to break. But he has a lot of potential. He looks the part. He has all the physical attributes that you want in an outside edge rush guy. He has long arms, he moves pretty well, he’s got good instincts. Now he’s just got to learn the game.”