Tony Bennett’s team will try to get back on track against Boston College.

After a heartbreaking home loss to Virginia Tech on Sunday night, the Virginia Cavaliers are back in action Thursday night against the Boston College Eagles. Tabbed by many as the worst Power 6 conference team during out of conference play, BC has looked a bit better in the early stages of ACC competition, winning home contests against Clemson and Virginia Tech. Can the Hoos move back above .500 in ACC play with a win against Steven Donahue’s squad?

Let’s delve into the Boston College Primer to see what awaits UVa.

1. There’s a famous scene in the classic movie “Butch Cassidy and the Sundance Kid” in which detectives for a railroad the duo robbed relentlessly pursue Butch and Sundance, prompting Butch to incredulously ask his partner in crime, “Who are these guys?” The same can be asked about this year’s Eagle squad. Most of the top 6 scorers from last year’s NIT team that scraped by the Hoos 70-67 at the Conte Forum is gone. Reggie Jackson, Joe Trapani, Corey Raji, Biko Paris, Josh Southern. You won’t see any of them in uniform at John Paul Jones Arena on Thursday night. Instead, BC’s starting five consists of four freshmen and Matt Humphrey, a redshirt junior who transferred from Oregon and sat out last year. The Eagles’ first player off the bench? Another freshman.

Given BC’s youth, it is unsurprising that the Eagles struggled mightily in non-conference play, limping to a 5-9 record that included losses to Holy Cross (by 22), Boston University (by 14), and Rhode Island. It’s also not surprising that the experience gained from the out of conference slate has translated to better play in the early stages of ACC action. In addition to the home wins over VT and Clemson, the Eagles understandably dropped road games on Tobacco Road to UNC and NC State. Throw in a 71-56 home loss to the Demon Deacons on Saturday, and BC stands at 7-12 (2-3 ACC) on the season with a No. 263 ranking in KenPom, a No. 280 standing in TAPE, and an RPI of No. 218.

2. After unprecedented success as the coach of the Cornell Big Red (three straight NCAA appearances, including a Sweet 16 in 2010), Steve Donahue took over at BC last season at the end of the Al Skinner regime. Donahue is primarily known for his offensive acumen, and his shuffle cut offense had frequently been compared to John Beilien’s offense at Michigan. In my mind that’s a good thing because Michigan really struggled to put the biscuit in the basket against UVa earlier this season.

Donahue’s offense is characterized by the “4” and the “5” often setting screens and handling (and handing off) the ball at the free throw line or top of the key (resulting in frequent pick-and-pop opportunities), different players cutting hard to the basket, and down and back screens to set up penetration or 3-pointers. Here’s a pretty typical set that I saw BC run a good deal against Wake Forest on Saturday, courtesy of The Cornell Basketball Blog and Men’s Basketball Hoop Scoop, a coaching website (click on the photo for the link to the original post): 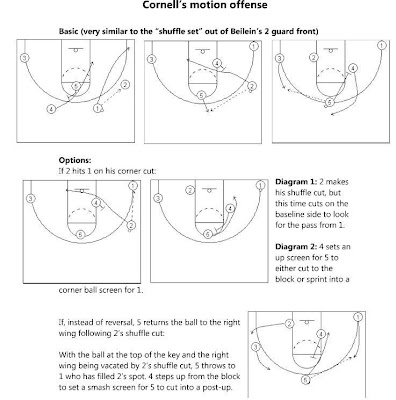 As you can see, Donahue’s offense is quite complex, and that can be why it’s so hard to defend when he has experienced players running it. Conversely, when you have an entirely new team figuring out its nuances on the job, you rank No. 292 in the country adjusted offensive efficiency.

3. Also like Beilein, Donahue likes to throw a lot of different defensive schemes at you, including heavy reliance on the 2-3 and 1-3-1 zones. If that’s the case on Thursday, the Hoos are going to have to be locked in from behind the arc much more than they have been recently. And I think that UVa will have a good chance to improve because I saw a good deal of confusion in the Eagles’ defense on Saturday with Wake getting a lot of easy scores off of “busted coverage.” Boston College is only No. 185 in adjusted defensive efficiency and is especially bad at forcing turnovers (No. 255), meaning that Virginia should have some room to operate.

PG: Running the show for the Eagles is freshman Jordan Daniels, who is listed at 5’9″ and 153 pounds but looks even smaller and slimmer. He makes up for his small stature with blazing speed, an above average handle, and some nice court vision, resulting in 2.3 assists per game. That assist tally leads the team as does his 82.4% shooting from the line, but he doesn’t get there much (.9 attempts per game). Daniels isn’t much of a shooter overall (33%), but he’s a decent 35% from 3-point land on 3.2 attempts per game.

SG: Manning the “2” spot for BC is Lonnie Jackson, a 6’3″, 170-pound freshman. Like UVa’s Joe Harris , Jackson was touted as a dead-eye spot shooter but has turned out to be a nice all-around player with a high basketball IQ. He’s shooting a lights out 43% from behind the arc and has a quick release. That said, he’s only shooting about 35% from inside the arc and a mediocre 63.3% from the line. Jackson leads the Eagles with a steal per game, which both tells you that he’s a decent defender and that the team isn’t very good at stealing the rock (No. 325 in steals per possession).

SF: At the “3” spot, Matt Humphrey, a 6’5″, 192-pound redshirt junior transfer from Oregon, likely will get the start. Whether he deserves it is another question. Humphrey launches a team-high 9.8 shots per game and yet is shooting a team worst (for players getting more than 7 minutes a game) 33% from the field. He’s also not shy about shooting 3’s but is hitting on only 27.6% of them on 5.5 attempts per game. Humphrey only manages 61.5% shooting from the line and coughs the ball up 2.2 times a game. He’s also not the most invested player on the defensive side of the ball.

PF: The starting power forward for BC is Ryan Anderson, a 6’8″, 217 pound freshman, the most highly touted of the Eagles’ nine-man class of 2011. Anderson is a face up “4” who has rung up four double-doubles on the season and leads the Eagles in rebounding at 6.4 boards per game. While Anderson has also put up 9.6 points per game, he hasn’t been very efficient, shooting a subpar 40.4% from the field, 25.4% from long range (on over 3 attempts per game), and 68% from the line. Despite lacking heft, Anderson has been a quality on- and off-the-ball defender for the Eagles.

C: Rounding out BC’s starting lineup is Dennis Clifford, a 7’0″, 241-pound freshman. Clifford is the Eagles’ leading scorer at 9.8 points per game and last week’s ACC Rookie of the Week. He’s sneaky athletic but not very strong, resulting in 2.6 turnovers per game. Clifford can score down low and also knock down the midrange jumper, and he boasts a sweet 56.6% shooting percentage to go along with a “solid for a center” free throw shooting percentage of 65.8%.

PG: Gabe Moton, a 6’1″, 177-pound sophomore, is one of the few returning players from last year and maybe the best defender on the team. The fact that he’s averaging less than 18 minutes per game is a pretty good indication of his offensive limitations. He’s not as good of a distributor as Daniels, averaging only 1.4 assists per game, and while his shooting percentage isn’t bad (42%), he has difficulty getting his shot off as he’s averaging less than 3 shots and only 3.4 points per game.

SG: John Cahill, a 6’1″, 170-pound senior, is another good defender for the Eagles. He too has trouble getting shots off because of his size. His shooting percentage of 47.1% is fine, but he’s only taking 2 shots and chipping in 2.9 points in a little more than 15 minutes per game.

SF: Patrick Heckmann is a 6’5″, 196-pound freshman. Earlier, I noted the inefficiency of Matt Humphrey, and you might be wondering why he’s been in for the opening tip. Well, he replaced Heckmann, who was a turnover machine, with a team high 3.1 TOs per game, and Donahue finally yanked him from the starting lineup after he gave the ball up 7 times in the ACC opener against the Tar Heels. Heckmann’s a decent enough shooter (46.8%) and scorer (9.6 points per game), but he’s not much of a defender.

5. Sabre poster 504-C Brandon predicts a 66-43.2 UVa win, with the Hoos having a 98% chance of winning. Meanwhile, the Team Rankings simulation (available here) has it as a 63.1-49.8 UVa win. Anyone who saw the Cavs’ game on Sunday realizes just how much they struggled without Assane Sene down low and the degree to which Tony Bennett and company are trying to figure out rotations and what to do on offense.

Keep in mind, though, that UVa’s first game last year after Mike Scott went down was a 60-47 home loss to a mediocre Iowa State team. The rest of the year then turned out better than expected, and I trust Bennett and this team to figure things out pretty quickly starting Thursday. I will predict a 61-47 UVa victory, with some of those 3’s that have been off the mark finally hitting the spot.

Author’s Note: Many of the statistics and analysis in this article were gathered through watching the two teams, ESPN.com, 504-C Brandon’s TAPE site, Warren Nolan RPI site, Teamrankings.com, and KenPom.com.