Fourteen class of 2018 wing prospects (shooting guards and small forwards) have reported scholarship offers from the University of Virginia. Three of those prospects are off the board.

– Paul VI (Fairfax, VA) Brandon Slater announced his commitment to Villanova on May 24.

– Greg Floyd, who attends Los Angeles (CA) prep school Middlebrooks Academy, reported an offer from the Cavaliers much earlier in the process, when he was a class of 2017 recruit. He has since reclassified to 2018 and is committed to Long Beach State.

Four more of those wing targets don’t appear to have Virginia seriously on their radar. They are Quentin Grimes, Nassir Little, Cameron Reddish, and Zion Williamson. Last July, the 6’6” Little expressed a desire to visit UVA. However, interest — from his end, from the Cavaliers end, or perhaps mutually — appears to have waned since. Barring a change I don’t expect Virginia to land any of these four recruits.

UVA looks to be out for the above seven prospects, leaving seven others Tony Bennett and company have reportedly offered still on the board with varying degrees of interest in the Wahoos. There are top defenders such as Musa Jallow and John Newman and others known for their prolific scoring ability, such as Keldon Johnson and AJ Reeves. In addition to the high school prospects, another player to keep an eye on is Mount St. Mary’s freshman transfer Miles Wilson, who reopened his recruitment following reported offers (per Scout.com’s Evan Daniels) from UVA and Virginia Tech. Auburn and Miami were the final two before he reopened his process. Wilson has visited Auburn and is scheduled to visit Miami this weekend.

Jallow has been on Grounds twice for unofficial visits and appears set to return for the NBPA Top 100 Camp later this month. Whether or not he will arrive before the camp or stay after for a third visit is unclear (UVA coaches are not allowed to have contact with recruits attending the camp while the camp is going on). Virginia has been a top contender for quite some time with Jallow, who is also considering offers from Stanford, Indiana, and Purdue, among others.

Highlights per In The Gym Hoops … 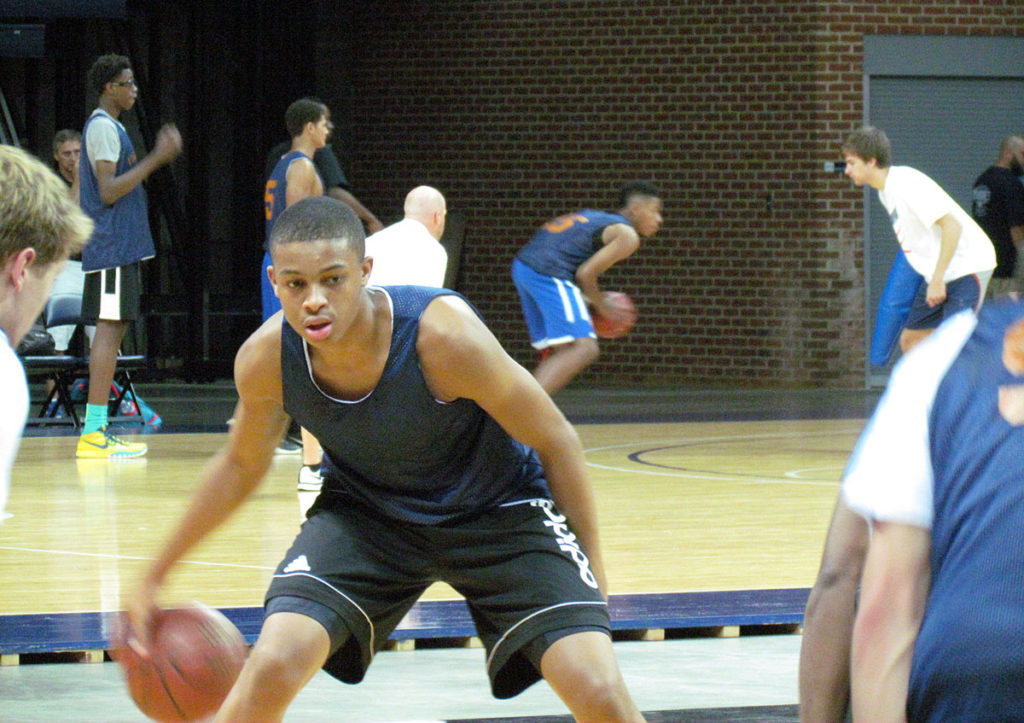 Johnson has had an outstanding spring, so don’t be surprised to see his recruitment continue to rise in the days and weeks to come. He visited UVA unofficially for the UNC game this past season and Coach Bennett visited him at Huntington Prep this spring. Some feel Texas could be the school to beat right now for the South Hill (VA) native. Shaka Smart developed a relationship before moving on from VCU to Austin. From my experience interviewing him I think it’s tough to get a solid read. I do think he wants to play out the summer and see what schools offer. After that, we’ll just have to see what happens when it comes to summer and fall visits.

Noah Kirkwood, 6’7”, Ashbury College (Kanata, Ontario, Canada), Offered by UVA in July of 2016
Notre Dame, Texas, and Vanderbilt are among the other schools that have offered Kirkwood. Notre Dame’s Rivals site interviewed Kirkwood in May and he spoke highly of the Irish, but there is not much else to go on at this point. UVA’s interest may be higher with other prospects at this time.

UVA is one of a handful of schools to recently offer Locke, a sharpshooter whose recruiting stock has risen significantly this spring. I think the Wahoos stand a good chance of landing a visit from the standout rising senior, who is also considering offers from Clemson, Florida, Georgia Tech, Maryland, Notre Dame, Virginia Tech, Xavier and others. Maryland just offered earlier this week.

John Newman, 6’5”, Greensboro Day (Greensboro, N.C.), Offered by UVA in May of 2017
Newman has officially visited Wake Forest. Greensboro Day head coach Freddy Johnson told me earlier this week that his all-state standout is close to finalizing an official to UVA to take place sometime in June. If UVA makes Newman a priority — scheduling him on an official certainly would indicate that he is — I think the Cavaliers stand a good chance, perhaps a great one. Clemson and Providence are also under serious consideration here.

AJ Reeves, 6’4”, Brimmer and May (Chestnut Hill, MA), Offered by UVA in May of 2017
Reeves just announced a final four of Louisville, Providence, Villanova and Virginia. Comments he made to MakePlayz (click here for the article) indicate to me that Providence is probably in the best position right now. As far as UVA is concerned, getting the sharpshooting prospect back on Grounds is crucial. He has been invited to play in the 2017 NBPA Top 100 Camp, which takes place June 13-18 in Charlottesville, before or after the camp could be a time for him to visit soon. Reeves and some Mass Rivals teammates (including c/o 2018 combo guard David Duke, another UVA target) visited unofficially last June.

Wiggins has had a good spring, scoring offers from Kansas and Florida, among others. Arizona, Maryland, and Wake Forest are among the other reported offers. While Wiggins visited UVA unofficially for the UNC game last season, my gut right now is that Virginia won’t be the choice ultimately. Several experts on 247Sports have predicted the 6’6” wing to Maryland.