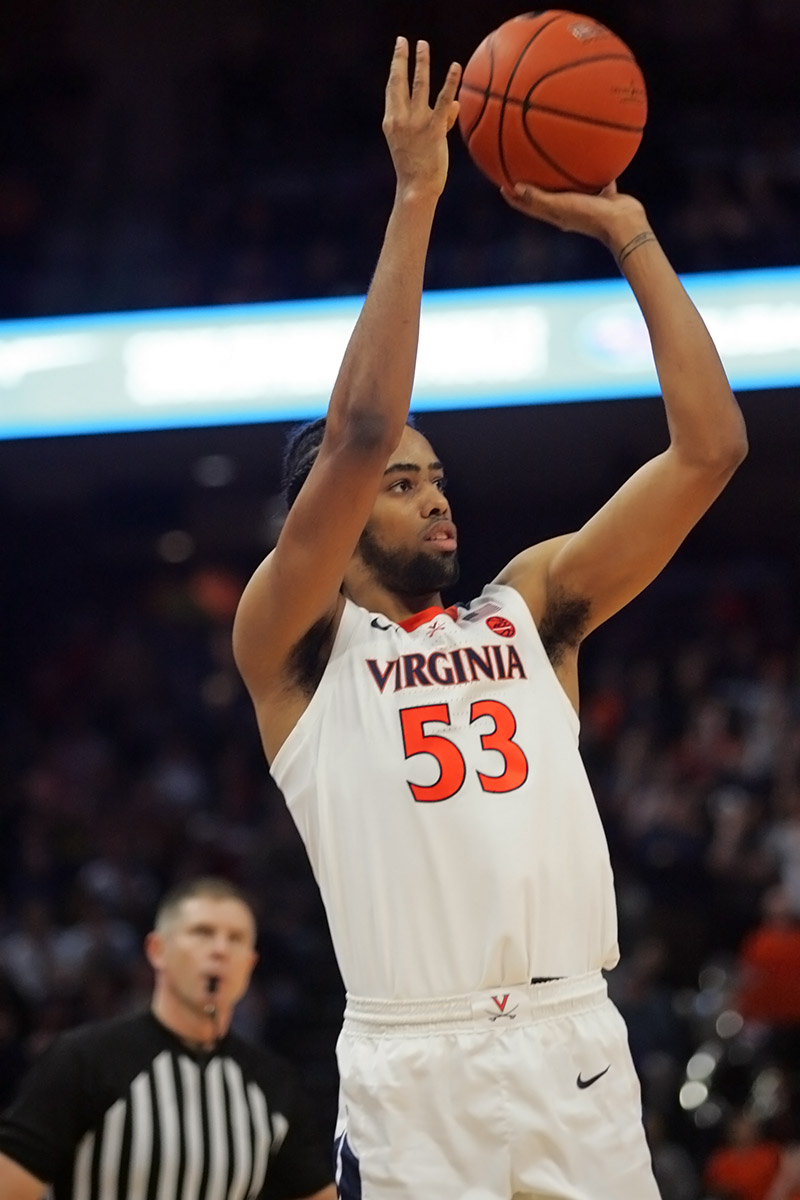 During Tony Bennett’s tenure at Virginia, scoring 65 points has been one of the sort of magic numbers for the program. The Cavaliers, after all, win around 90% of the time when they reach that mark during Bennett’s 11 seasons. UVA continued its good luck with that number going Sunday in a 65-63 overtime victory at Wake Forest. This year’s Hoos are 4-0 when scoring 65 points.

The outcome also gave Virginia its second straight road win as it tries to push through a 2.5-week stretch that’s featured four losses in six games. The Cavaliers have led in the final four minutes of all six games, but have found the way to the winner’s circle just twice.

“Every game we’ve lost, we’ve either been ahead or tied under four or five minutes,” Bennett said. “For this team, how do you figure out how to win? And that was deflating how it ended in regulation, but the ability to either come up with a stop, get an offensive rebound – again, we had moments where we missed free throws, missed breakaways, missed dunks – all those things happen. But to come away with one was important because in this league, as you’re seeing, whoever is ready and whoever is playing the best has a chance. There are some excellent teams, but everybody is in play.”

Bennett described how regulation finished as deflating because the visiting Hoos held a three-point lead in the final 10 seconds, but couldn’t close it out. Casey Morsell challenged a final attempt from Wake’s Andrien White and contacted his forearm on that 3-point shot. White made all three freebies and Kihei Clark just missed a heave from beyond halfcourt to send the two teams to the extra period.

At that point, UVA was staring into the face of its recent late-game demons. The pattern fit. The Hoos had trailed at halftime again and watched Wake Forest grow that lead to 12 points as the host made their final seven shots of the first half and their first after intermission too. Virginia had managed to not only reel in that deficit, but had moved ahead entering the final four minutes only to see the Demon Deacons jump back in front in the final minute. It looked so much like many of the other losses during the recent slide.

This time, however, the Cavaliers responded with what looked like two winning plays: a Jay Huff corner 3-pointer for a 54-53 lead with 39 seconds to go followed by a defensive stop and two Clark free throws with 20 seconds remaining. That gave Virginia the aforementioned three-point lead and it seemed like the team had maybe figured out how to win as Bennett put it. One Deacon timeout and Morsell foul later, though, it had all crumbled like the games before. Bennett said the Wahoos intended to give a foul in the final 10 seconds while leading by three points, but before a shot attempt was in motion.

Unlike the Syracuse overtime loss at home two weeks ago, UVA reversed its misfortune this time. Braxton Key got things started with a bucket and after Wake Forest tied it back up, Tomas Woldetensae put the Hoos in front for good. He lined up a 3-pointer and knocked it down with 3:55 to produce a 61-58 lead. A pair of free throws and a stick-back bucket from Mamadi Diakite proved to be enough from there to seal the win.

“I liked, again, the grit,” Bennett said. “Someone told me, your team’s gritty, they don’t have moxie yet down the stretch. Well, hopefully, we showed some grit and we’re moving that needle a little closer to having some composure down the stretch. That’s a process. But big win for us and again very thankful.”

That Woldetensae and Diakite had their fingerprints all over overtime was fitting.

Woldetensae set two career highs for his short time at Virginia with 21 points and 7 3-pointers. He also matched his career best with 6 rebounds on the stat line. He threw in one of each in assists, steals, and blocked shots too, the lone assist coming when he found Huff in the corner for the only other Cavalier triple of the day. Woldetensae had it going early and late. He made his team’s first basket of the day just 1:01 into the action and he added two more in the first 13 minutes. In addition to the go-ahead 3-pointer in overtime, he also canned a trey that gave UVA the lead entering the final four minutes of regulation.

The junior college transfer has made 24 of his last 55 3-pointers, a 43.6% clip that’s provided a distance shooting element that has been missing for much of this season.

“I think he’s continuing to learn the system and where he can be aggressive,” Bennett said. “He’s unaffected. He’s not afraid to shoot and I like that. He’ll make two or three, he might shoot an airball, and then take the next one. I like that.”

Diakite, meanwhile, put together a solid game with 16 points, 7 rebounds, 1 assist, and just 1 turnover. He made 7 of 10 shots, including a big offensive rebound and putback with 1:05 left in overtime to push his team’s lead up to three points again. Like Woldetensae, Diakite contributed in the early going and sustained the production all the way through. His first bucket came at the 18:07 mark of the first half and he closed out the Demon Deacons with four points during the extra session. That was a good bounce-back game after a sub-par outing against NC State.

Virginia also picked up 13 points, 7 assists, and 8 rebounds from Clark. Key chipped in 7 points and 8 rebounds despite a rough shooting day all around (2 of 16 overall, 0 of 4 from 3, and 3 of 9 from the free throw line). Huff fought through foul trouble all day so his only basket was that critical 3-pointer in the final minute of regulation to go with 5 boards and a blocked shot. Kody Stattmann missed the game with a concussion.

Wake Forest was missing players as well. Brandon Childress, the team’s leading scorer, and Chaundee Brown sat out with injuries. White filled some of the gap with 21 points that included the three clutch free throws to force overtime. Olivier Sarr added 11 points and 10 rebounds for his third straight double-double. The Demon Deacons attempted to get Sarr a shot to tie in overtime, but he couldn’t get it up in time.

It proved to be enough to grab a road win in league play despite some shaky moments.