The Virginia basketball team is now less than 20 days away from the season opener at Syracuse! The Cavaliers, fresh off their first National Championship, take a new-look group to the dome on Wednesday, Nov. 6 for a 9 p.m. tipoff on the ACC Network.

In the weekly Fan Friday segment here on The Sabre, we gave you a chance to pick between those four teams in our own preseason poll. The votes are in and the Cavaliers topped the charts. The results:

Who Will Win The ACC Basketball Regular Season?

It’s time for the rest of this week’s article. Let’s go!

Thread Of The Week

This article series is dedicated to UVA fans so this week’s choice was an easy one. Poster Eta shared this article from UVA Today about Som Patasomcit, one of the Hoos’ biggest fans. Here he is in our photo gallery from the Florida State game earlier this year: 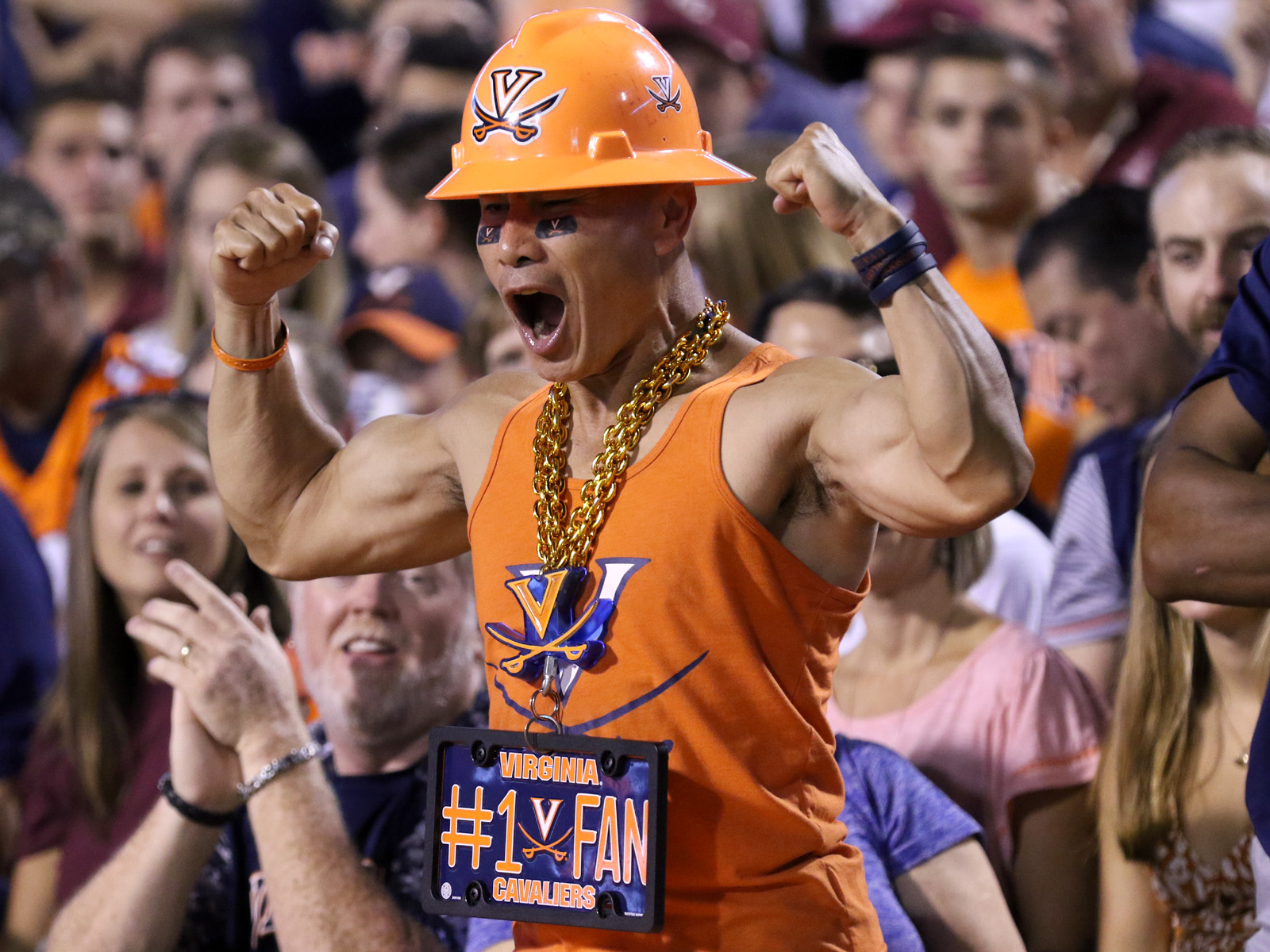 It’s a good read and it sparked several good posts in this thread. Some of the select posts are below too. 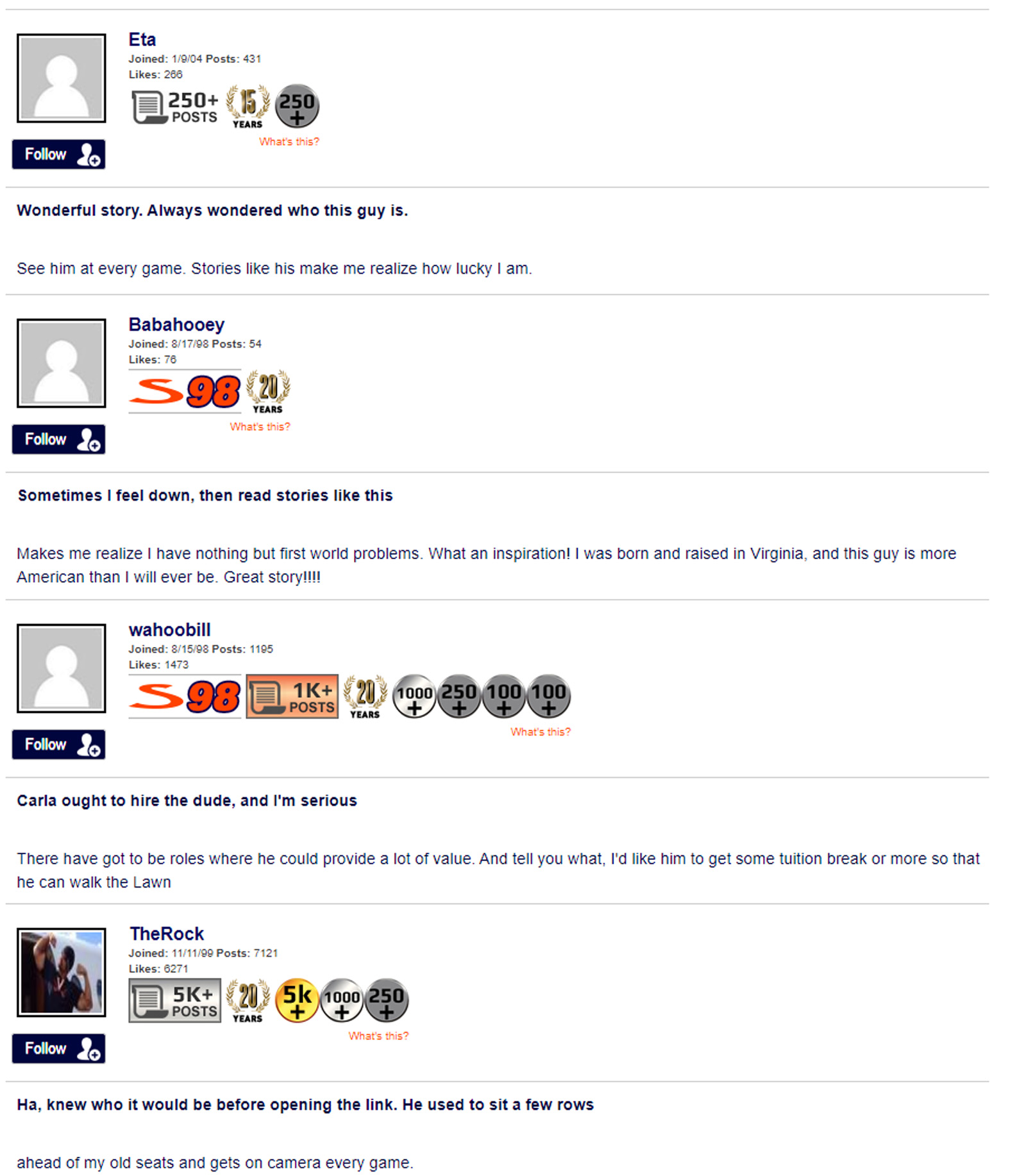 Wave, you’re the Fans of the Week! 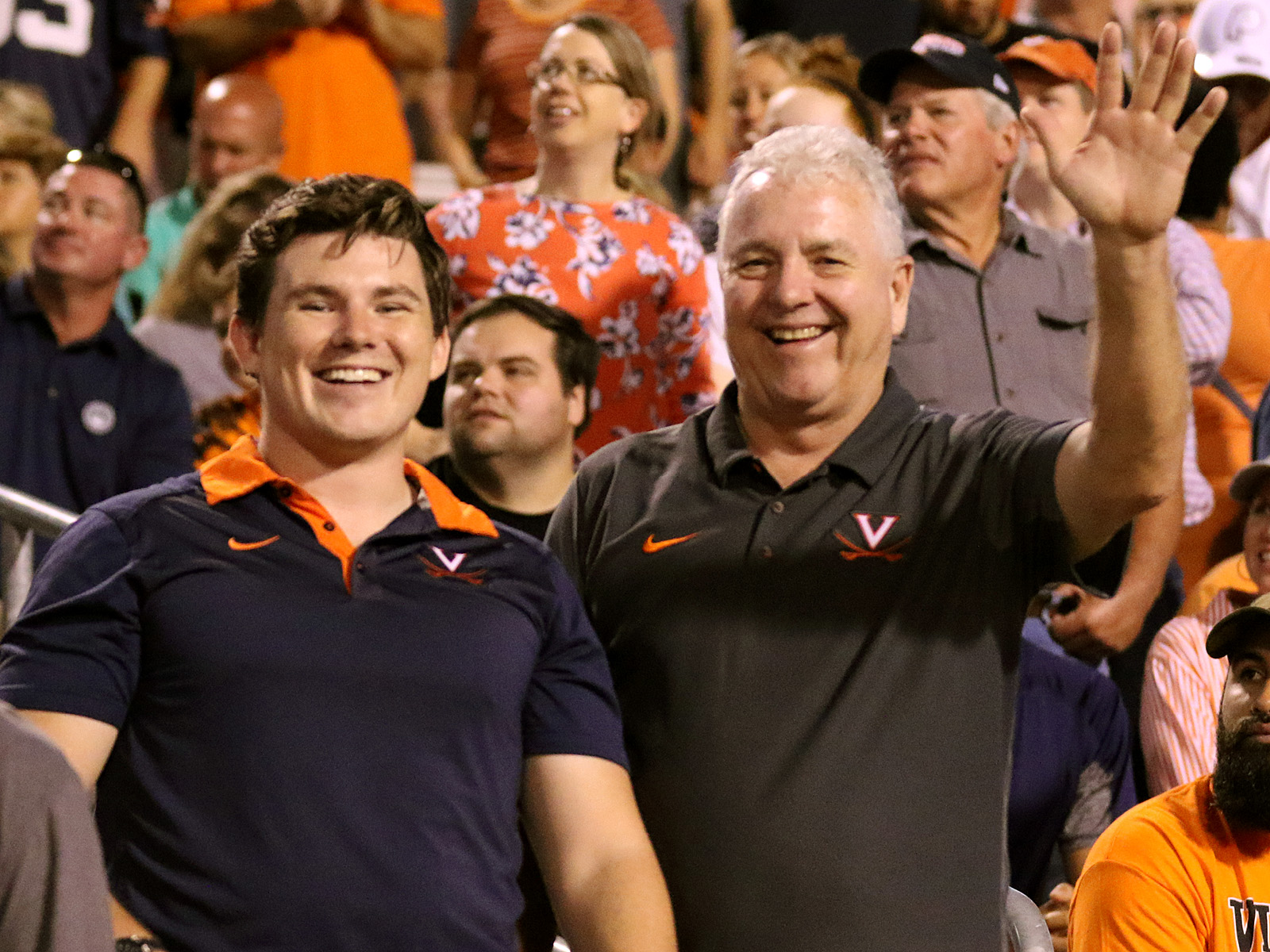 The football team is back at Scott Stadium for the only time this month so hopefully students are ready to bring the noise again.

The Cavaliers are going back to the orange jerseys this week. 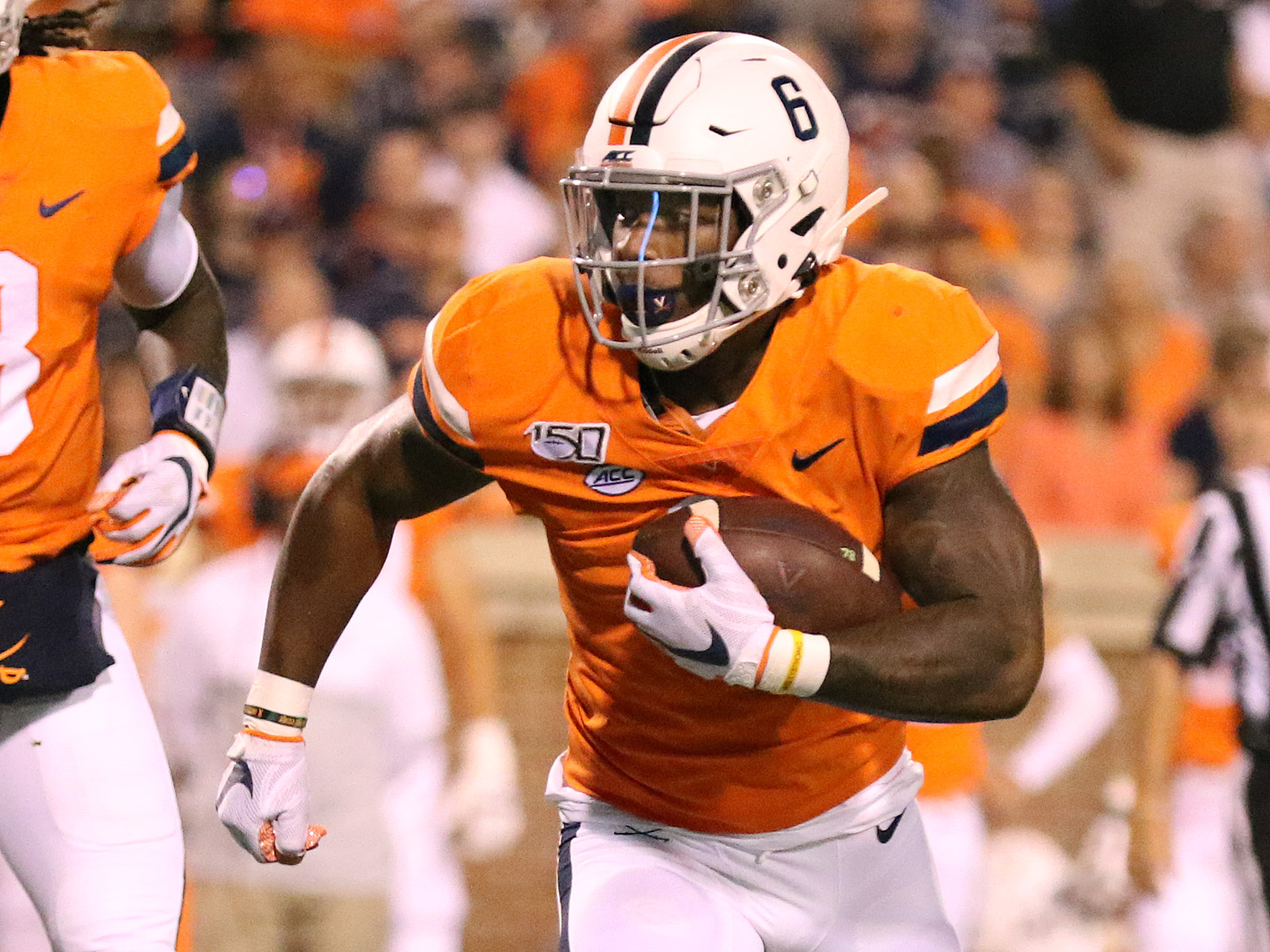 Takes Of The Week

On The Corner message board, poster Trugoy started a thread about pro careers for Virginia athletes. With Ryan Zimmerman and Sean Doolittle going to the World Series with the Washington Nationals, that led to a good conversation about the best Virginia pro career of all time. The whole thread is here where you’ll see names like Bill Dudley, Henry Jordan, Dawn Staley, Becky Sauerbrunn, Javier Lopez, and more. Some of the posts are featured below. 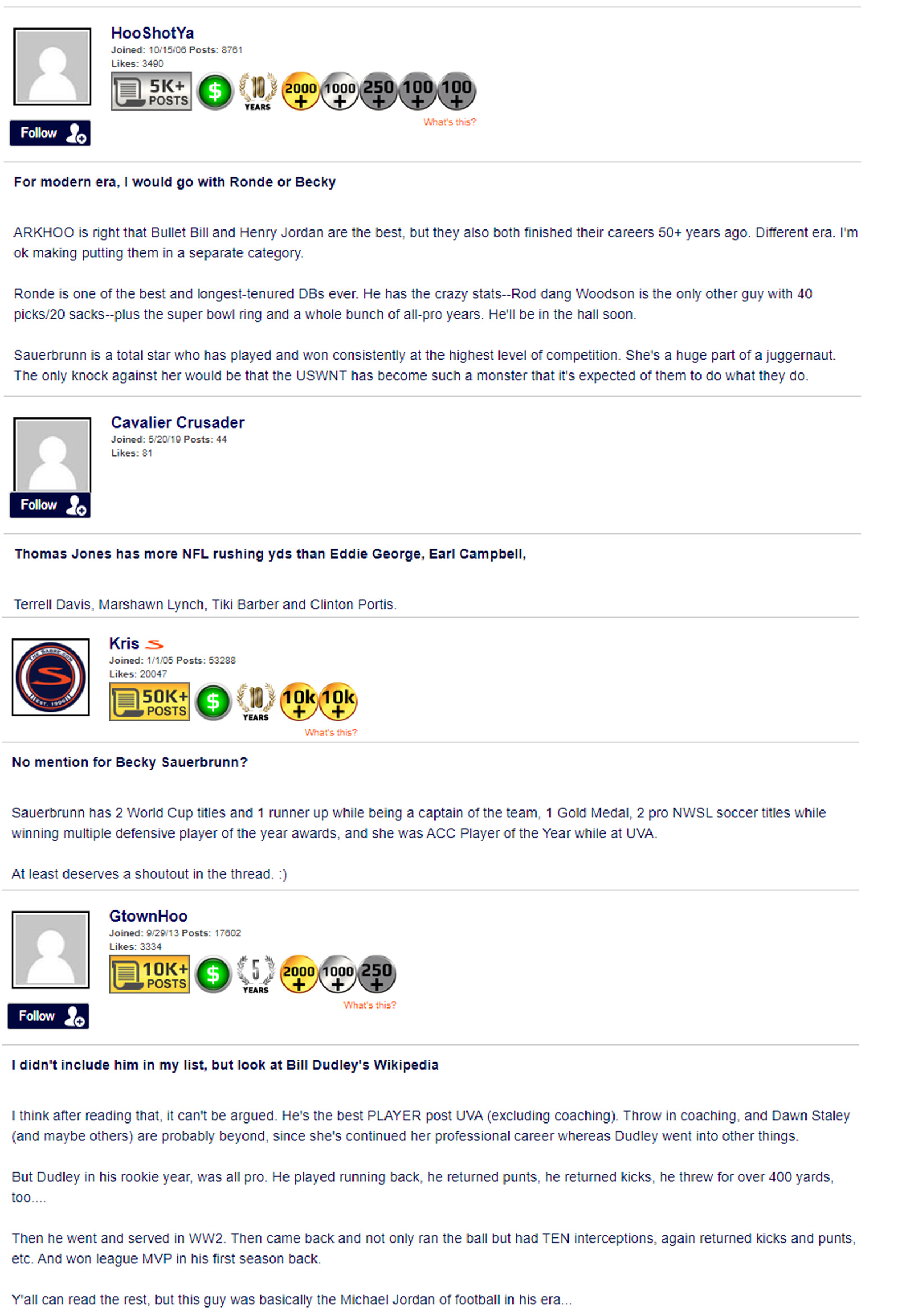 The pick this week comes from the football board where Cavalier Crusader asked a simple question: “I’m curious … who believes we can ‘run the table’ until the ACC Championship Game?” The responses are in this thread.