The second and final day of the 2018 Nike EYBL Session IV in Hampton was overshadowed with the news of the passing of 17-year old James Hampton, a member of the North Carolina-based AAU program Team United. Hampton, who was going to a senior at Liberty Heights Athletic Institute in Charlotte (N.C.) next year, collapsed on the court Saturday evening (May 26) during a matchup with Team Phamily (AZ). It was later revealed that the young man had passed away.

In the face of tragedy, Team United’s players and coaches persevered to play both scheduled games on Sunday (May 27). Regardless of the outcomes, those kids playing was an inspirational sight. In morning play, they overcame an early deficit to beat All Ohio Red, 62-49. Team United lost in afternoon play to Howard Pulley (MN), 82-77, but showed a tremendous amount of heart in rallying from double-digits. They fell short but did not quit until the final buzzer sounded.

Thoughts and prayers to James Hampton’s family, friends and teammates. A GoFundMe page has been set up to help his family. Click here if you would like to donate. 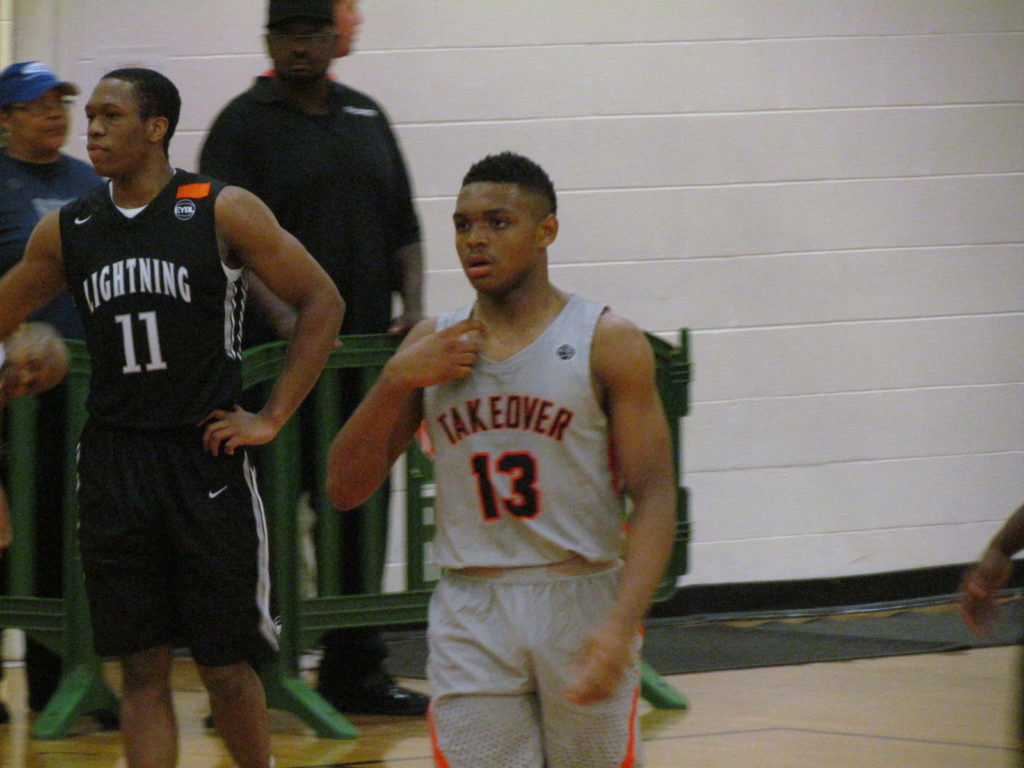 The Team Takeover (D.C.) 17U team won both of its Sunday games in Hampton, sweeping all four weekend games in total and finishing 2018 Nike EYBL session play with a perfect 16-0 record. With an average margin of victory of 24 points this past weekend, Takeover sent a statement that they will be tough to beat in the July Peach Jam Championship, which is the title event of the EYBL season.

University of Virginia-bound guard Casey Morsell (pictured above) had 18 points on 6-of-11 shooting (4-of-6 from 3), distributed two assists and had two steals in Sunday morning’s win 96-74 win over the New York Lightning. Stats for Sunday night’s win over Expressions Elite (MS) are unavailable as of this writing; however, through Takeover’s first three games in Hampton, the St. John’s (Washington, D.C.) rising senior had made 17-of-27 field goals (roughly 63%), including 12-of-17 (70.6%) from beyond the arc, and averaged 16 points and 3 assists per game. He performed well on both ends of the court, serving as one of Takeover’s top defenders.

I wrote in my EDGE Report on Saturday that I think Morsell will be ready to contribute as soon as he steps on Grounds. Sunday’s performance only strengthened my opinion.

Observations and notes from the Nike EYBL in Hampton

– I spoke with Morsell on Sunday evening (stay tuned for a full report), following Takeover’s win over Expressions Elite, and asked what his plans are for the coming weeks before Peach Jam. He mentioned possibly attending the NBPA Top 100 Camp, which takes place June 12-16 at John Paul Jones Arena. He would like to make an unofficial up to Charlottesville to get to know the players. While he says he has a great relationship with the coaches, he wants to get to get to know the players better. No visit date has been set at this time, though.

Speaking of his close relationship with the coaches, Morsell spoke with Coach Bennett on Saturday.

– After watching some of UVA’s targets on Saturday and Sunday, here are some initial impressions. Keep in mind that these are my opinions based solely off of last weekend’s action in Hampton.

Whitney is listed as being 6’7”, 195 pounds. I think he’s probably around 6’6”, 185. He has a similar frame to current Hoo De’Andre Hunter. He struggled from beyond the arc in the times I saw him in Hampton, and according to D1Circuit.com he made only 4-of-17 3s in the first three games. What I liked was how Whitney looked to contribute in other ways with his outside shot not falling, whether it was driving to the basket for opportunities for himself or others or crashing the boards. The Mac Irvin Fire (IL) and Roselle Catholic (N.J.) standout made some nice passes, showed solid ballhandling, is a fluid athlete with tremendous rise, and showed some craftiness in finishing at the basket.

When I first saw him play, I thought Whitney was more of a perimeter player. I still think he is initial inclination is to be on the perimeter; however, he showed he didn’t mind mixing it up down low and even threw in a few post-ups in one game, which is similar to the way De’Andre Hunter is used. With his length and quickness, he has the potential to be a good defender in guarding the 1-through-3 positions. In time I think he could guard the 4 spot (thinking of UVA going small), but he needs to add some strength.

I can see why Virginia likes Whitney. He fits exactly what it appears they want in a tall, athletic wing with offensive ability. He also plays with a chip on his shoulder, which I like. The question moving forward is how much traction Virginia will get here. He has mentioned pace of play in previous articles discussing why he likes his current high school and what he may be looking for in college. If pace is an issue, that’s typically not good for the Cavaliers.

The fact that Williams and his Team United (N.C.) teammates even played on Sunday was amazing. As reported in yesterday’s EDGE report, Williams plans on attending the NBPA Top 100 Camp next month, so I should have a better gauge of his talents next month.

Size-wise, he is a definite 6’7”, maybe 6’8”. He has a similar frame (only bigger) to former Blue Ridge and current Clemson Tigers forward Aamir Sims in my opinion. While Whitney seems to be a perimeter-first type of wing, Williams operated more in the post and at the free throw line. He showed he could drive the basketball from the top of the key. He flashed a pull-up jumper and has a nice looking outside shot. He also showed he can make nice reads and passes to his teammates. Williams disappeared offensively for a long stretch in Sunday evening’s game. I’m not going to critique any of the play on Sunday given the circumstances, but his activity is something I will watch when I see him at the Top 100 Camp.

Williams is a player with the athleticism to guard multiple positions. To me, he can clearly guard wings and posts. Whether or not he could guard a 1 is a question, although from an athleticism perspective he has surprising explosiveness and is a very good leaper.

I watched Lundy Saturday morning and again on Sunday afternoon. My impression remains the same. He’s a good player with a good feel for the game. He communicates well. He’s unselfish. He has a good-looking 3-point stroke that just doesn’t want to go down during AAU season (he’s shooting 30% from 3 according to D1Circuit.com). He’s about 6’5” or 6’6” and is a good, not great athlete. Overall, Lundy is a good player. He is comfortable guarding multiple positions, including in the post. I don’t think he has the same explosiveness or upside of a Whitney or Williams, though.

A great communicator with terrific feel and passing ability, Morton resembles the prototypical Bennett-style guard. He is a legit 6’5” … similar size to Ty Jerome, in fact. Morton, who plays point guard at his high school in Pennsylvania, is primarily an off-the-ball player for the NY Renaissance. Still, you can see he is a coach on the court, orchestrating the action even without the ball.

Morton only attempted 62 shots (including 30 3s) for the Rens in 15 games, but I can see why Bennett has offered him. It’ll be interesting to get his reaction after he visits Virginia, which he reportedly plans on doing, because I believe he would be a good fit.

Roach is a 6’2” point guard out of Paul VI in Fairfax, Virginia, and a significant part of the undefeated Team Takeover squad. He has excellent quickness, decision-making ability, and is excellent in the open court. Roach seemed comfortable in a half-court setting as well. Outside shooting is a question mark just because he hasn’t taken many 3s this AAU season … then again, with players such as Justin Moore and Casey Morsell and others, he doesn’t have to.

Roach is a talented player who Virginia seems high on. Like Whitney, though, he has mentioned wanting a faster pace, so whether or not the Hoos have a shot is a bigger question.

– Rivals.com and 247Sports.com 4-star and ESPN.com 5-star class of 2020 prospect Noah Farrakhan, who Rivals National Recruiting Analyst Corey Evans reports is making a Memorial Day stop at the University of Virginia, is an athletic and quick guard capable of playing the point and off the ball. The 6’1” prospect has had some ups-and-downs for Nike Team Florida this AAU season. He has posted 30 and 25 points, respectively, in contests earlier this spring. However, after scoring 13 in his team’s opener in Hampton, he scored only 4 on 1-of-15 shooting in the next two contests.

Farrakhan, a New Jersey native who transferred to IMG Academy in Bradenton (FL) last fall, has averaged 10.9 points per game on 37.7% field goal shooting and 31.2% shooting from beyond the arc in 15 EYBL games (stats per D1Circuit.com). Virginia has yet to offer but it wouldn’t surprise if Bennett comes through on this visit. Stay tuned.

Top-50 sophomore guard Noah Farrakhan is on an unofficial visit to Virginia@Cavs_Corner https://t.co/RsEcXzNOR1

– Farrakhan’s Nike Team Florida teammate, Scottie Barnes, really caught my attention. In one sequence, the 6’8” forward out of Fort Lauderdale (FL) pushed the ball up the court and hesitated at the top of the key before firing a perfect pass to a teammate for an easy layup. The rising junior followed that up with a nice pull-up jumper. I didn’t know who he was before, but I immediately looked him up to discover that he is a 5-star recruit. To use a Bennett word, Barnes is a “complete” player capable of contributing at a high-level in many ways.

Through 15 games this EYBL season, Barnes has averaged 14.5 points, 7.5 rebounds and 4.5 assists per game. The blue bloods are in pursuit with Kansas and Kentucky offering. No offer from UVA at this point.

– Gonzaga (Washington, D.C.) class of 2020 forward Terrance Williams II boasts a strong offensive game. The 6’6” prospect is not a great athlete, but he can really shoot, is a crafty scorer and has good feel. Virginia hasn’t offered, but it’ll be interesting to see if Bennett gives him a look in the coming months.

– Class of 2019 forward Juwan Gary announced his top five recently and did not include Virginia, which makes sense considering the Cavaliers have not offered. The 6’6” prospect was getting a close look from the Hoos, though, and after watching him play for Team United (N.C.) this past weekend I think he has some of the combo forward tools Virginia would be looking for. He’s really active, a good defender, and a good slasher on offense. Shooting is the primary concern. Even though he has announced a top five, it wouldn’t surprise to see Virginia toss its hat in the ring if he impresses this summer.

– Ty Jerome’s younger brother, Kobe, was in Hampton playing for the 15U NY Renaissance team. Just like his brother, Kobe is a coach on the court all the way.