Hubbard, a 4-star recruit out of Pennsylvania, and Harvey, a consensus 3-star prospect out of Florida, were members of UVA’s class of 2020. Both players redshirted this past season – Hubbard was credited with playing in one game while Harvey did not play in any.

Virginia returns its entire starting offensive line next season, but Hubbard potentially could have been an important rotational piece next season with the potential to work his way into a starting role. Mendenhall described the 5’8” Harvey as a “dynamic” talent last preseason. Harvey was expected to get a long look at quarterback this offseason, but it would have been easy to see him moving to running back if quarterback didn’t work out.

Harvey’s departure leaves an already thin quarterback position even thinner. Rising redshirt sophomore Brennan Armstrong is the expected starter next season. Rising redshirt junior Lindell Stone, who has played in only three games his Cavalier career, is the projected backup. True freshman Ira Armstead enrolled in January, but the cancelling of athletic activities cost him the chance to gain needed experience before his first season in Charlottesville.

Rising redshirt freshman Luke Wentz remains listed at quarterback. However, he was injured much of last fall and could wind up switching positions anyway. Adding a graduate transfer seems important for next season, if only for depth purposes. If that doesn’t happen, cross your fingers that Armstrong stays healthy.

The speedy Milledge, a running back/H-back, and Williams, a cornerback, announced via Twitter weeks ago that they had put their names in the transfer portal. The cousins, who are Florida natives, saw some playing time last season but wound up redshirting.

With Atkins and Kier, Mendenhall noted the former is graduating and has an internship lined up in San Antonio while the latter has left the program to focus on his academics.

The departures of Atkins, Kier, and to a lesser extent Milledge, who was listed as a running back but seemed likely to play more of an H-Back-type role, leave UVA with three scholarship running backs for next season – rising junior Wayne Taulapapa, rising sophomore Mike Hollins, and rising senior big back Jamari Peacock, whose role is primarily as a blocker.

Taulapapa received the second-most carries behind Bryce Perkins last season, accounting for 116 of UVA’s 442 rushing attempts. Kier (32), Hollins (21), and Atkins (15) totaled 68 carries. Mendenhall said UVA may add a graduate transfer running back next season … Ronnie Walker, who has entered the transfer portal following his sophomore season at Indiana, seems to be the likely candidate. Although he has only played two seasons at IU, the former Hopewell (VA) star enrolled in college in January of 2018, perhaps making it possible for him to graduate this spring. 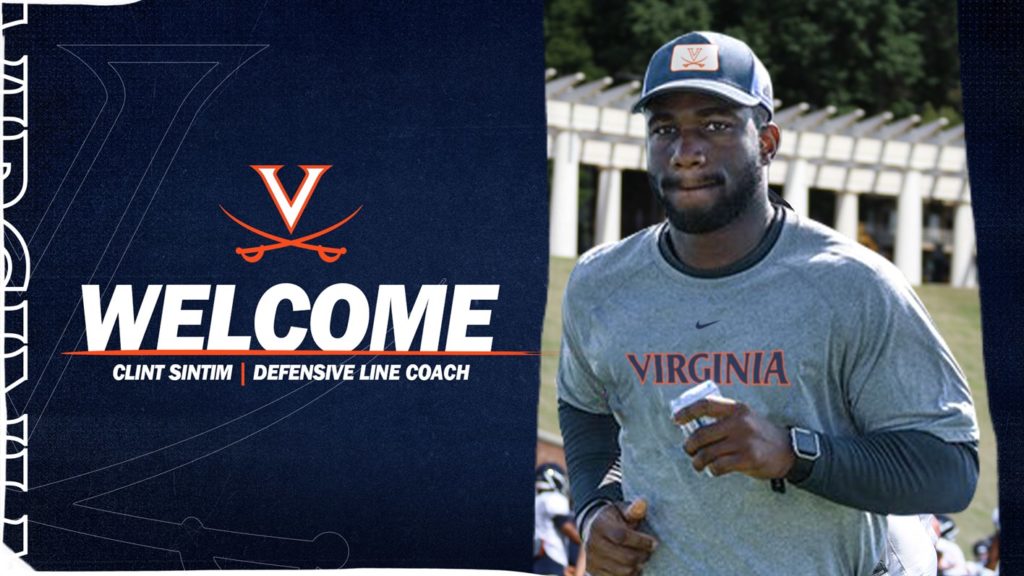 When searching for a replacement for departed defensive line coach Vic So’oto, Mendenhall said he felt it was “very important” to add UVA “passion” and “tradition” to the program. That led him to the hiring of former Virginia star Clint Sintim.

Mendenhall added that the defensive staff “pushed hard” for Sintim.

Mendenhall noted that former UVA players Evan Butts and Kirk Garner have joined the personnel staff to help with recruiting. Garner previously served as a graduate assistant and may be a “future star” in as a coach or evaluator, Mendenhall said.

Of Butts, Mendenhall said: “I’ve seen him in every possible context. He’ll help us find and select players.”