“We are pleased to add four quality student-athletes to our basketball program,” Virginia men’s basketball head coach Tony Bennett said in UVA’s official press release welcoming the new recruits. Click here to read the full press release. “All four of these young men are talented basketball players and high character individuals. They come from outstanding families and will value a degree from the University of Virginia.”

Via Twitter, Virginia men’s basketball announced the letters of intent and posted video on each prospect.

Virginia basketball’s class of 2016, which included Kyle Guy, Jay Huff, De’Andre Hunter and Ty Jerome, was rated in the top 10 nationally by Rivals and 247Sports. UVA’s class of 2022 is not consensus top 10, but it’s close. As of this writing, the 4-prospect haul is rated no. 8 nationally by 247Sports and no. 13 nationally by Rivals. Virginia has the no. 2 class (behind Duke) in the ACC according to 247Sports and the no. 3 class (behind Duke and UNC) in the conference according to Rivals.

Below are the individual rankings of UVA’s 2022 Class according to Rivals, 247Sports and ESPN. All four are consensus 4-star prospects. Isaac Traudt has the highest average ranking nationally (50), followed by McKneely (63), Bond (66.7) and Dunn (110). Leon Bond has the highest national ranking of any of the prospects with a 42 from 247Sports.

– Bond averaged 11.8 points, 5.9 rebounds and 1.2 blocks per game in 2020-21, helping his team to the Wisconsin Division 1 state championship title. The Wisconsin Sports Network describes the future Hoo as an “exceptionally athletic wing player who plays well above the rim.”

– Bond told Scott Grodsky of CBS 58 in this report (a worthwhile watch) that he chose Virginia because “I want to be the person I can be, on and off the floor. That’s why I wanted Virginia.”

– “It was the hardest decision of my life…One just felt, in my heart, was right,” Bond to Grodsky on making his college choice. Bond chose the Hoos after taking official visits to Cincinnati, Marquette and UVA. These were his three finalists. Marquette made him a priority when Shaka Smart took over as head coach, but the Cavaliers won out.

– “One thing that stands out about me is I play really good defense in my opinion,” Bond told Grodsky. 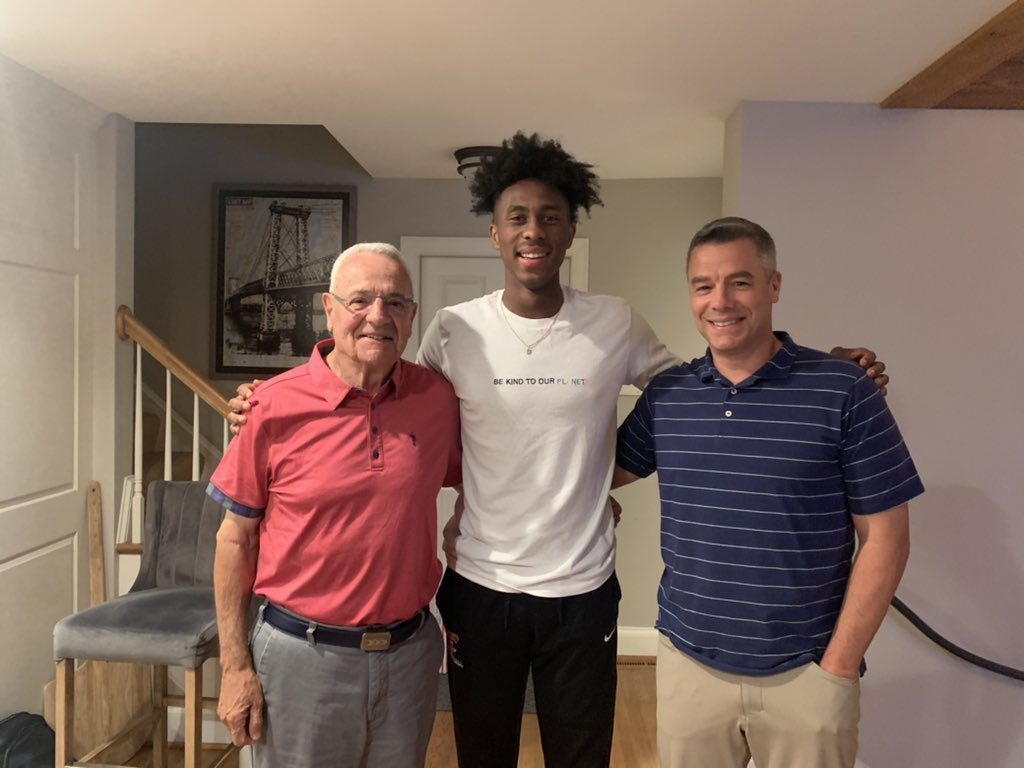 – Dunn became the fourth member of Virginia’s 2022 Class when he committed to Coach Bennett on the final day of his official visit. The New York native took an official visit to UVA September 10-12, one week after Bond, McKneely and Traudt made their second official visits on Grounds. The Virginia staff wanted Bond to visit with the other three but he was already scheduled to visit Minnesota.

– Dunn did not receive his first scholarship offer until late in his senior year at Long Island Lutheran (N.Y.). It was May 6, 2021, in fact, when Stony Brook offered.

– Dunn’s older brother, Justin, is a pitcher in the Seattle Mariners organization. The younger Dunn credits his brother and parents with helping shape his work ethic. Ryan, who played baseball when he was younger, says he thinks he can hit his brother. He may be able to help the players end the losing streak to the UVA coaches and staff in the annual softball game.

– According to VirginiaSports.com, Dunn made 44% of his 3s his junior and senior seasons at Long Island Lutheran.

– Playing this spring and summer for the New York Jayhawks on the Adidas 3SSB circuit, Dunn averaged 11.4 points, 7.9 rebounds and 2.4 assists per game this summer. According to the Adidas 3SSB website, the 6’7” wing drained 46% of his 3-pointers while helping the Jayhawks to a 5-3 record.

– A postgraduate year at Perkiomen School (Pennsburg, PA) is underway for Dunn.

– “I’ve never seen someone take off on that type of recruiting trajectory in 15 years of coaching this program. He outpaced any one year growth as far as recruiting. His senior year was a strange one for us. We’re independent, so we play in tournaments, showcases, non-league type of stuff. During the pandemic, those things were limited. We wound up going 3-0 during his senior year. Ryan was unanimously voted as captain. He practiced hard his senior year. He got better in that time, but I think his leadership skills grew.

“He’s a late bloomer in a lot of ways. He grew. Added strength and confidence. He chose to attack it as opposed to wait it out. I think he worked hard and used it to his advantage. Add the fact that he grew four inches from the end of his sophomore year to his senior year. It was just the mentality he had. He attacked it and attacked it and attacked it.” – Long Island Lutheran head boys basketball coach John Buck on Dunn’s ascension.

– “When he first saw me, he said he noticed my size. Me doing what I can do at my size was special to him. I’m lengthy, tall, and play multiple positions. He said he can help me with coming off screens, shooting, being like a Trey Murphy, a DeAndre Hunter, or a Malcolm Brogdon. He sees a lot of them in me. He said if I come there, Coach Curtis can help me in the weight room.” – Dunn, recalling one of his first conversations with UVA coach Tony Bennett.

– “I was talking to Coach Buck before and I said UVA was kind of like LuHi on steroids,” Dunn recalled. “Once I sat down in Coach Bennett’s office, LuHi came to my head. I saw the words on top and saw the Final Four banner and thought, ‘This is where I need to be.’” – Dunn, recalling his commitment to Virginia

– McKneely was the first member of Virginia’s class of 2022, announcing his commitment in January of 2021. Two unofficial visits made prior to the pandemic forcing a year-plus-long Dead Period helped McKneely make his decision. McKneely has been 100% Hoo ever since, reaching out to help pursue other recruits and cheering on other UVA sports on social media. He made an official visit to Charlottesville alongside Isaac Traudt this past June, and he returned for an official visit with Traudt and Bond in September.

– As a junior, McKneely averaged 22 points, 4.1 rebounds and 4.0 assists per game, helping his team to the state championship game. Down big, Poca made a furious comeback before falling to top seed Williamstown, 50-47.

– As a junior, McKneely earned Gatorade Player of the Year for basketball in West Virginia and the Bill Evans Award for the state’s top basketball player.

– “It was going to be a really tough decision no matter what, but especially in a year where I couldn’t take visits. It was a really tough decision. I had really good schools recruiting me and I had really good relationships. Ultimately, Virginia was the place for me. Our high school, we have been doing what they do for a while. Coach Bennett personally recruiting me was big. I spoke with Coach (Kyle) Getter here and there, but Coach Bennett was the one recruiting me and that meant a lot. We are a religious family and Coach Bennett is a religious person, so that meant a lot. There is the culture there, the Five Pillars, the family atmosphere … just everything.” – McKneely on why he chose Virginia

– “He likes my ability to shoot it. A lot of people know about that. He sees me as a Joe Harris or Kyle Guy getting off on pin downs. I can run the 1 or play the 2 and he sees me guarding the 1, 2, or 3 on the other end.” – McKneely, revealing what Coach Bennett said he liked the most about his game

– “Isaac went from 6-foot-2, 150 pounds [as a sophomore] to 6-4, 185 [his junior year]. So his body is developing. He has gotten bigger, stronger and quicker. Most of the time he is working on his skill development. He is working out at home and in the gyms. He is dedicated and wants to be a great player.” – Poca head boys varsity basketball head coach Allen Osborne to Joe Brocato of West Virginia Metro News in this article.

McKneely signed on the dotted line on his 18th birthday.

Officially official!!! 18 and apart of the @UVAMensHoops family! #GoHoos 💙🧡 pic.twitter.com/GR5RwtG3dB

Congratulations @IsaacMcKneely for signing to play basketball for @UVAMensHoops! A great accomplishment for a great young man! pic.twitter.com/17bMAdTkqc

Happy National Signing Day (& 18th Birthday) to Poca’s Isaac McKneely! This evening the PHS senior signed his National Letter of Intent to continue his basketball career at the University of Virginia in front of his family, team, & community! Congratulations Isaac!🏀 #PutnamProud pic.twitter.com/fuinfSUR3P

Excited to get back to Charlottesville this weekend for an unofficial visit! Basketball game in JPJ on Friday, and football game in Scott Stadium on Saturday! See you there Hoos fans! #GoHoos 💙🧡

– Traudt visited Creighton, Michigan State (official), Nebraska (official), North Carolina (official) and Virginia (official) this past June. He also considered scholarship offers from Gonzaga and Texas, among many others, before committing to Coach Bennett.

– “I think it would be a pretty good fit for me. I like how they play offensively, how they utilize their wings like Sam Hauser, and even big guys like Jay Huff on the perimeter too. [Coach Bennett] showed me film of Sam coming off screens and shooting 3s, but also initiating actions. I definitely like their priority on defense with the Pack Line. We run something similar at our school. I think I could potentially go in and pick it up pretty fast. Off the court, I’m a big fan of Coach Bennett. I like how he is open about his faith because that’s how I am and I think it’s cool.” – Traudt said of UVA earlier in the recruiting process, prior to his pledge to the Hoos.

– “I just told him I was blown away with everything. I knew the staff were great people, but I didn’t know how the facilities were so amazing. The same with the campus. I knew it was historic, but it was more than I thought. I didn’t know there would be a cool college town either.” – Traudt said following his June official to UVA.

– “I can remember when he was in fourth or fifth grade at one of our youth camps. He went elbow to elbow and hit 25 shots in a row, or something like that. I looked at our staff and we knew this was a kid who might help us in the future. We knew at the time he was in fourth or fifth grade that he had a unique skillset for sure.” – Grand Island Senior head boys varsity basketball coach Jeremiah Slough on Traudt.

In 1995, Christy Graves Traudt signed her letter of intent to play volleyball at the University of Kearney. Today, her son Isaac signed his letter of intent.
What an honor…I am truly blessed. @GishActivities pic.twitter.com/mnciDKUS1e