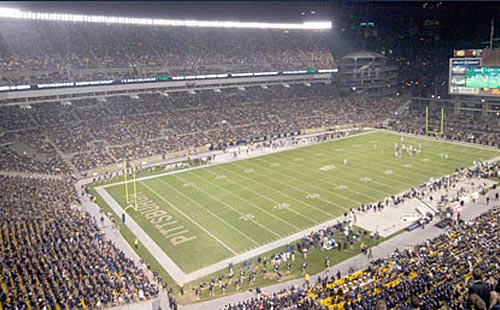 Welcome to SabreBetrics, a weekly column focused on college sports betting. The goal is to provide thoughtful and data-driven analysis that can be used by betting neophytes and experienced gamblers alike. A few ground rules before we get started:

With these rules in place, it is time to turn our attention to the upcoming college football season. As you may know, Las Vegas sportsbooks are not in the business of losing money. In fact, betting lines are meticulously calculated and modulated to ensure a profit no matter the result. However, if there is one place where sportsbooks are vulnerable, it is with season win total bets. This is particularly true for professional football where sportsbooks use season bets to get bettors in the door. The assumption is that you will eventually lose money once you are there.

There is often value at both the high and low end of the projected win total spectrum. It is incredibly difficult for elite teams to make it through the season without stumbling on the road or falling victim to injuries. Similarly, even the worst teams find ways to win games even when they are a clear underdog in every match-up.

There is another reason to incorporate season-long bets into your gambling portfolio that should not be ignored: it is a lot of fun! It gives you an excuse to watch games that you might otherwise skip. You get a free ticket to jump on another school’s bandwagon and learn about their players and traditions. Additionally, your success or failure is not tied to a single game. It is a great way to stretch your gambling dollar.

Without further ado, let’s examine some of the best available season win total bets for 2021.

(*Note: All Over/Under bets are based on the regular season only, and do not include conference championships or bowl games. If regularly scheduled games are canceled, most sportsbooks will void the bet and you will get your money back. Individual lines at sportsbooks may differ. Numbers presented here are drawn from multiple books.)

Over 6 wins (-165): There are a few reasons to feel optimistic as a Virginia football fan entering the 2021 season. Brennan Armstrong figures to improve in his second full year under center. Six returning offensive linemen have starting experience. The offensive unit, which averaged just more than 30 points per game in 2020, returns playmakers in Keytaon Thompson, Billy Kemp IV, and an experienced group of running backs. The Cavalier defense also figures to take a step forward with the return of Aaron Faumui, who sat out last season because of the pandemic. For the first time in several years, there is actual depth in the secondary with transfers Anthony Johnson and Josh Hayes joining mainstays in Joey Blount, De’Vante Cross, and Nick Grant.

Unfortunately, there are still plenty of question marks. What is a realistic improvement for a defense that ranked 104th among FBS teams in conceded yards per game in 2020? Can anyone fill the 6’7″ void left by Lavel Davis Jr., who tore his ACL during spring practice and has an unspecified timeline to return? Can Armstrong improve his decision making and cut down on game-changing turnovers? Can Virginia remain competitive in the ACC Coastal despite difficult road games against North Carolina, Miami, Louisville, and Pittsburgh (as well as home games against Wake Forest, Notre Dame, and VPISU)?

With these considerations taken as a whole, it’s easy to see why oddsmakers set 6-6 as the marker for Virginia. I expect to see a marginally better version of the 2020 team with flashes of brilliance as well as stretches of futility against the meat of the schedule. Since picking exactly 6 wins isn’t an option, I’ll take the over, as 7-5 seems more likely to me than 5-7.

Five Teams That Will Go Over Their Win Total

1. LSU over 8.5 wins (-130): It should not have been surprising that LSU followed the 2019 National Championship season with a less than impressive 2020. Ed Orgeron’s team was wildly inconsistent, alternating between being an unstoppable offensive juggernaut and looking completely ineffective against Auburn, Texas A&M, and Alabama. Losing starting quarterback Myles Brennan in the third game of the season was a major blow. Brennan suffered another injury this summer to his non-throwing arm and his outlook for the 2021 season is very much in jeopardy. Despite the question at quarterback, expect the Tigers to be significantly improved this year. LSU returns more starters than any other team in the SEC and had top five recruiting classes in 2019 and 2020. Biletnikoff Award watch list receiver Kayshon Boutte is a match-up nightmare even for the best defenses in the SEC. The Tigers also get to play Florida, Auburn, and Texas A&M in Baton Rouge. A 9-3 season seems likely, but I would not be surprised to see LSU sneak into the College Football Playoff discussion at season’s end.

2. Minnesota over 7 wins (+105): Minnesota has been a difficult out under P.J. Fleck. The disappointing 3-4 record in 2020 could have just as easily been 5-2 had two overtime losses (at Maryland and at Wisconsin) gone the other way. Tanner Morgan is one of the most experienced quarterbacks in the Big 10 and passed for 30 touchdowns and 7 interceptions in 2019. Almost everyone returns for the Gophers on offense, save for first-round draft pick Rashod Bateman. Only two games on the schedule (at Iowa and home against Ohio State) look like clear losses. If Minnesota can cobble together a competent defense, they have a chance to make some noise in the Big Ten West.

3. San Diego State over 6.5 (-105): Rooting for Brady Hoke is a lot easier when he isn’t wearing the Maize and Blue. After returning to San Diego State to coach the defensive line in 2019, Hoke was promoted to head coach in 2020 following Rocky Long’s retirement. The Aztecs were stellar defensively during Hoke’s first year, finishing second in the nation in fewest yards allowed. The offense is still a work in progress and has an unsettled quarterback situation. Still, this defensive unit is good enough to carry San Diego State to a seven-win season with even modest improvement on the offensive side of the ball.

4. East Carolina over 4.5 wins (-145): There are plenty of reasons to expect ECU to improve upon its 3-6 record last season. Quarterback Holton Ahlers returns for his fourth year with 30 games of experience under his belt. In 2020, he captained an effective offensive unit that averaged 400 yards and 30 points per game. The Pirates’ defensive unit, which struggled throughout the season, returns most of its starting core. ECU will not seriously contend for the AAC title, but it is a bowl-caliber team.

5. UNLV over 1.5 wins (-110): Since you are already staying up late to watch San Diego State, why not throw on UNLV as well? UNLV is a bad football team coming off a non-competitive 0-6 season. Somehow, head coach Marcus Arroyo managed to translate this into a decent recruiting class. Though you wouldn’t expect a single class of freshmen to turn the Rebels into a MWC contender, perhaps they can find a way to win two games. They have a few reasonable chances for wins against other poorly ranked teams, including Eastern Washington, Utah State, and New Mexico. If UNLV can find a way to beat the Eagles at home in Week 1, they will only need one additional victory to win the bet.

Five Teams That Will Go Under Their Win Total

1. Alabama under 11.5 wins (-145): At first glance, it might seem insane to bet against Nick Saban and the defending National Champions. Alabama is the favorite to repeat at +250 and seems destined to make its way into a seventh College Football Playoff in eight years. However, to win this bet, you just need Alabama to slip up once. There are several opportunities for this to take place. Though we have grown accustomed to watching Alabama trounce major programs in the opening game of the season, Miami is no slouch. In addition to playing Mississippi and LSU at home, Alabama must also navigate road trips to Gainesville, College Station, and Auburn. Though Alabama is perennially in “reload” versus “rebuild” mode, it is worth considering all the talent that is no longer with the team (including a record six first round picks in the 2021 NFL Draft).

2. Northwestern under 6.5 wins (-115): The Wildcats exceeded expectations in 2020, winning the Big Ten West and giving Ohio State a run for its money in the championship game. Northwestern’s success was not tied to its offense; the Wildcats ranked 95th in the country in passing yards, averaging only 6.3 yards per attempt. Unfortunately for Northwestern, only 39% of its defensive production returns in 2021. The early part of the schedule is manageable before things get significantly more difficult in October and November. Pat Fitzgerald might be able to grind his way back to a bowl game, but I do not see this team winning seven games.

3. Notre Dame under 9 wins (-140): If you place this bet, you get to root against Notre Dame each week. What more convincing do you need? It also makes sense from a football perspective. Notre Dame needs to replace 14 players who were picked up by NFL teams in the draft or free agency, including All American Jeremiah Owusu-Koramoah and quarterback Ian Book. Notre Dame ranks 124th in the FBS in returning production from the 2020 season. With difficult games against Wisconsin, Cincinnati, North Carolina, VPISU, and USC (not to mention a date with Virginia in Charlottesville), it is tough to imagine this team can get to 10 wins.

4. Army under 8 wins (-130): Jeff Monken has revitalized football at West Point. As if beating bitter rivals Navy and Air Force wasn’t enough, Army finished with an impressive 9-3 record and a close loss to West Virginia in the AutoZone Liberty Bowl. Army should make it back to a bowl game this year, but they are not quite as talented as the 2020 squad. Assuming likely losses at Liberty and at Wisconsin, the Black Knights would have to win 9 of the other 10 games for you to lose the under bet. Games against Wake Forest, Georgia State, and their two military rivals make this unlikely.

5. Penn State under 9 wins (-140): No program had a weirder 2020 season than Penn State. After an 0-5 start, the Nittany Lions rattled off four straight wins to end the season. This has led to an overinflated win total for 2021. Though James Franklin has a talented squad, the primary problem will be the schedule. Penn State will be an underdog in road trips to Madison, Iowa City, and Columbus. Home games against Indiana, Michigan, and Auburn further complicate the path to double-digit wins.

In 2020, fellow Big 10 schools Indiana and Northwestern had the best winning percentage against the spread. Each team covered seven of the eight games they played. The team with the worst record against the spread? Kansas (1-7-1). It has been a rough 12 months in Lawrence, and with Vegas setting their win current total at 1 for the year, the misery seems destined to continue.

The SabreBetrics column is written by a Virginia graduate and long-time fan of The Sabre. The opinions expressed in this article are not directly associated with TheSabre.com and are intended for recreational use only.